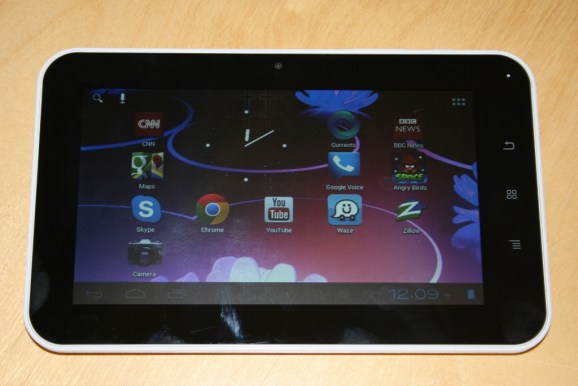 Still waiting for that new iPad mini? Or perhaps you couldn’t wait and decided to drop $199 on some 7-inch tablet?

How about a $50 Android tablet?  That’s what the much-hyped Aakash2 will go for, or just $35 if you’re an Indian student.

Back in late October, 2011 we reported on the first Aakash. Targeted at students in India and intended to sell for just $35, the tablet was designed to achieve a basic level of functionality to allow students to read e-textbooks, perform basic web searches, watch video, and still have enough power for future HTML 5 interactive education sites that are being created as we speak.

The first Aakash we reviewed was rough around the edges, but it showed the basic concept was feasible. Now we have the Aakash2 — and it’s not just a concept any more. This is a fully functional mini-tablet that basically does all the main things you expect from a tablet. And it’s still under $60 for most buyers.

I fully expect the market price to go down under $50 once this things reaches hyper mass production. We can already get something like this in China for around $50 (same exact specs … hmmm.) So it’s not a fluke.

It seems that the sub-$60 tablet is here to stay, with all of the implications noted by Vivek Wadhwa last week on VentureBeat. You can get a device like the Chinese A-pad in the US for around $79, but that is still a bit high for poorer students, so the $35 price point is pretty important. And India is not the only place people are working on a super cheap tablet for student use. Intel has started on a similar project in the U.S., although it hasn’t made any announcements on specs or price point yet.

The Aakash2 tablets are initially being deployed by the Indian government in post-secondary institutions. The government has been deploying free broadband and Wi-Fi access in colleges and universities through the National Mission for Education through Information & Communication Technology (NME-ICT) and the National Knowledge Network projects. So far 600 universities and 1,200 colleges are covered.

Initially Aakash2 units will be rolled out in Wi-Fi-enabled campuses.

Ubislate tablets — the commercial version of Aakash — with SIM (data and smartphone functionality) will have a retail price of Rs.2,999 ($54.52) for the GPRS version and Rs.4,499 ($81.80) for the 3G version. The Aakash and Ubislate tablets are also billed as the only Adroid tablets to feature DataWind’s UbiSurfer browser, which is supposed to accelerate web pages load times by factors of 10 – 30x. The UbiSurfer technology is covered by 18 U.S. patents that allow it to deliver web pages on GPRS in about 5 to 7 seconds (compared to many minutes if web pages are accessed on GPRS using traditional means). On 3G, the speed improves to 2 to 3 seconds. GPRS network coverage is available to over 80 percent of the 1.2 billion population of India. Through a special agreement with a network operator, DataWind offers Rs.98 ($1.78)/month for unlimited internet on GPRS.

The device is greatly improved over the first version in all categories. It looks better, runs better, feels better. Although the version we reviewed is not the final version, it still feels very mature, with rounded corners, easy feel, and responsive screen. Upgrading from an ARM11 (366Mhz) to a Cortex A8 (1GHz) makes all the difference in the world. Android 4.0.3 feels responsive, screen pans are smooth, and apps open as quickly as you would expect. RAM has also been upped from 256MB to 512MB. You can overload it if you have too many things running at the same time, but some simple app management takes care of this easily. Battery life is okay — I was able to spend a day using it as my go to device and it held up, but only just. Not bad for a 3000mAh battery.

It has a USB port as well as a card slot. Since there is only 4GB on-board storage, you will want to stick a memory card in here. I had a 4GB memory card laying around so I popped that in, which gave me plenty of space for anything I wanted. However, the big win of the card slot is the ability to pop in a semester’s worth of eDocs and exercises. I could totally see going from class to class and swapping disks, or putting everything I need for the semester on a single large card. I could also connect my USB thumb drive using the adapter, giving me plenty of storage options.

Unlike its predecessor, the Aakash2 has an on-board speaker, microphone, and front-facing camera. Do not bother trying to take nice pictures with it, since it only supports 640 x 480-pixel images. However, this is enough for video chat.

Although this is supposed to be an education device, people are going to play games on it. So I loaded Angry Birds Space, and the graphics were super smooth, with good sound from the speakers as well.

The screen is nice until you take it outside. I’ve had the same issue with my first-generation iPad and the first Galaxy Tab, so it’s in good company. However, when I was a student, my favorite thing was to study outside. I can’t believe I’m the only one.

The device uses a mini USB connector instead of a full-size USB2. This is a good decision from a form factor point of view, but annoying from the human point of view, as I had to use an adapter to connect my keyboard. (It’s a bonus that I could connect a keyboard at all, though!) The first Aakash came with a case and keyboard. I expect this will have that option as well, making my complaints moot.

The device I had was accidentally reset to factory settings, and I know DataWind, the company who built the tablet, had a custom browser and an accelerator as well as firmware. The web browser is slow. Once the page is loaded, it’s fine, but this thing really chokes on images. I asked about this and it was confirmed that the slow images were in fact expected with a factory restore.

Despite the drawbacks, for just $60, I want this device! Because of the small, 7-inch form factor, it’s easy to put one of these in my back pocket and carry it around like a third device. I can also see giving these away as the price drops under $50. Imagine going to a hotel, but instead of seeing a bunch of magazines laying about, they put one of these in your room. And you’re expected to take it with you. Heck, many textbooks cost more then these mini tablets.

The world of cheap tablets is not coming, it’s here. Now we just need to sit back and watch the world change again — just as it did when cheap smartphones hit the market.