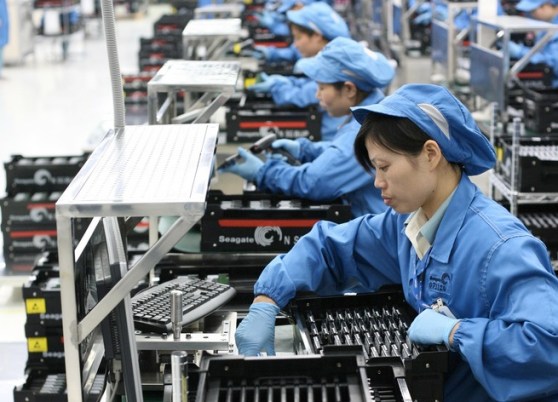 Click here if you’d like my weekly column sent directly to your inbox. It takes less than a minute to sign up, and you’ll get the stories before they’re published on VentureBeat.
How much longer will Silicon Valley stand by and watch the “silicon” part of its name wash away like so much sand?

This week, one of the most popular stories on VentureBeat carries the headline “Hardware is dead.” It’s an echo of a sentiment expressed earlier this year by venture capitalist Marc Andreessen, that software is eating the world. Here’s the argument in a nutshell: If you’re making hardware, get out of the business as fast as you can, and move to something more profitable.

In fact, hardware is not actually dead; it’s just that, like running cattle (as one VentureBeat commenter eloquently put it), the hardware business is no longer very attractive to Americans. That’s because it’s difficult, requires huge up-front investments, and offers narrow and unpredictable profit margins. So from a venture capitalist’s point of view, sure, hardware is dead.

From a broader perspective, however, the disappearance of hardware manufacturing expertise could have a long-term, negative impact on the health of the Silicon Valley economy. Harvard management professor Willy Shih recently said in a troubling roundtable on U.S. competitiveness, “Innovation requires access to manufacturing technology. This is not about being patriotic. It’s a strategic question.”

One thing is sure: American manufacturing expertise is slowly fading away. As the New York Times reported in January, we simply cannot compete with Chinese electronics manufacturing facilities. If you need to make a sudden change in the display for a smartphone, as Apple did, Foxconn managers can roust 8,000 workers from their beds and have them working 12-hour shifts the same day. If you need to hire thousands of manufacturing engineers overnight, Chinese companies can do it, whereas in the U.S., that many qualified candidates don’t even exist. Yes, these companies have an edge over U.S. because they pay lower wages and have looser environmental controls, but it’s our lack of manufacturing expertise that clinches the deal. Even if price was no object, you could not manufacture the iPhone in the U.S. — or any other competitive smartphone, for that matter.

But do we even want to compete in this business? When Chinese manufacturers can build an Android tablet that sells for $45 in the Shenzhen electronics markets, and if Fry’s Electronics can sell it to Americans for $80, that puts an enormous downward pressure on prices in the tablet market. If you wanted to sell commodities, you would have gone into corn and pork bellies instead of technology.

Ditto for smartphones, PCs, notebooks, ultrabooks, and most of the components that go into them. This is an industry that U.S. companies long ago ceded to overseas manufacturers for ostensibly smart economic reasons: Why compete in a market with dwindling margins when you can move up the food chain, become a design- or software-driven company, and enjoy fatter margins?

The problem is that these smart economic reasons make sense in the short term only. Long-term, we’re undercutting our capability to compete — something only Apple seems to understand, with a $500 million, multiyear chip development project to make itself more independent from chip manufacturers like Samsung and Intel.

Here’s why this is a problem: Asian manufacturers are moving up the food chain just as fast as U.S. manufacturers are, only one step behind. In the 1980s, when U.S. companies led the world in chip and PC manufacturing, Taiwanese and Chinese firms got a toehold in the market by making electronic components like resistors, capacitors, and motherboards. Eventually they got good enough at making those that they were able to move up the chain to chip manufacturing, then chip design, then the design and manufacture of entire electronics products.

At the same time, U.S. firms climbed up the ladder toward operating systems, software, integration services, and marketing, ceding the lower layers of the stack to their overseas partners.

If this trend continues, U.S. companies will eventually be standing on the very top rung of the technology industry ladder, doing the last thing we know how to do better than anyone else: public relations. Meanwhile, overseas manufacturers will do everything else: making the chips, building the hardware, and writing the OS and software.

Unfortunately, once you’ve reached the top of the ladder, you have nowhere to go but down.