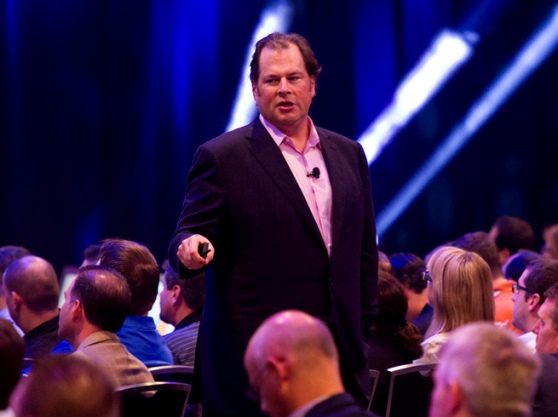 According to Salesforce.com, a crowd of 90,000 people will gather in San Francisco tomorrow morning to listen in to the keynote address from the company’s outspoken CEO, Marc Benioff. This number may be a slight exaggeration, but nonetheless it signals the company is not just a customer relationship management (CRM) giant in the eyes of the tech community.

Salesforce made five acquisitions this year as it expands its suite of tools to every corner of the enterprise, fueling an endless stream of rumors. Who will they buy next? No doubt, this will be a major talking point at the conference, alongside discussions about how the company will integrate the startups it recently acquired.

Tech conferences can be overwhelming, so we compiled talking points for you. Whether you’re planning to attend or are simply curious, here’s what to expect at Dreamforce 2012.

“Chatter” and cloud storage — Who will Salesforce.com acquire?

Salesforce‘s CEO Marc Benioff’s knows how to command the attention of a room; he dropped a bomb at Disrupt last week in San Francisco. Immediately following an enterprise panel featuring cloud service providers, Box and Okta, he announced the introduction of two competing products.

“We are not trying to snuff competitors out,” he said, shortly after making the announcement. Benioff also hinted that the company would add file-storage features to Chatter, the social enterprise tool that is similar to Microsoft-owned Yammer. The tool is called ChatterBox — a nod to potential competitor, Box?

As it typically does, Salesforce may be gearing up for an acquisition. Rumors abounded that Box would be the primary target. I hopped on the phone with Box’s CEO Aaron Levie who responded with a firm “absolutely not”. Levie told me that Salesforce might be entering into the cloud storage space, but that few companies truly understand the value of file sharing and collaboration.

Putting the rumors to bed, a spokesperson from Salesforce told me to expect news about Dropbox, Box’s primary competitor. An integration, perhaps? Expect plenty of discussion around Chatter and new file storage capabilities.

What’s next for Buddy Media?

Salesforce’s most expensive buy was Buddy Media, which it picked up for $689 million in August. Buddy Media is one of the biggest makers of social media tools for the enterprise. The result is Salesforce Marketing Cloud, a social networking platform for marketing. This was integrated with technology gained from both Buddy Media and Radian6, a social media monitoring provider.

Marketing Cloud is expected to be officially announced Wednesday morning by Benioff during his keynote address.

Do.com, Salesforce’s productivity tool that competes with Asana, recently upgraded its product with a host of new features. Do also recently graduated from being a free app to a fremium service. Led by Manymoon’s founder (a startup acquired by Salesforce last year), it recently announced its first huge customer: Google.

In addition, Benioff mentioned Do.com at Disrupt last week, so I expect to hear more from him on this topic at Dreamforce.

Will they revive Force.com?

Salesforce may have talked it up, but as industry analyst Ray Wang told Computer World, Force.com is not particularly intuitive or easy to use. We may not hear any announcements this year, but it’s a good conversation topic to raise with fellow conference-goers. During panels, ask questions about whether the company will invest in its development.