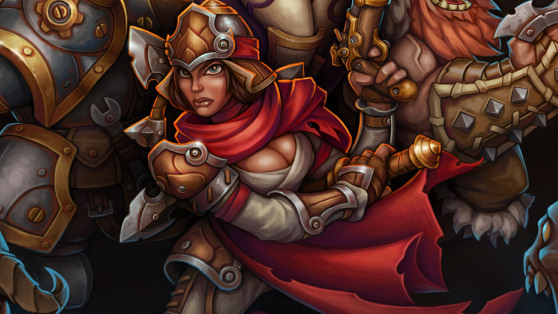 The release of Torchlight II is only a day away, but from spring to fall, the game has faced competition with Diablo III and now another action role-playing game, Borderlands 2.

Runic Games might be caught in between Blizzard and Gearbox Software, but chief executive officer Max Schaefer doesn’t sound worried about handing Torchlight II to the masses while in those companies’ shadows.

“Our shipping date is not determined by strategic thinking about when other games are coming out,” Schaefer told GamesBeat in a phone interview. “It’s really when we’re done with the game. And we took all that extra time to polish the heck out of the game and make sure that it’s exactly what we want it to be. So that’s why I’m confident now — I’m confident in our game. And where we fall in respect to other games is kind of random, and you can’t control that.”

Schaefer said that the nearly side-by-side release with Borderlands 2 doesn’t make “as big of a difference as people think.” He credited Blizzard with driving millions of new people into the action-RPG market, which wouldn’t have been possible otherwise.

“I think it’s a good time for action-RPGs because we got Path of Exile coming in, Borderlands 2, and Grim Dawn,” he said. “It’s good. I think there’s a symbiotic relationship between action-RPGs rather than a competition. So the more good ones there are, the more people get into the genre and check out the other ones. … I actually think it’s even done good for us just by bringing more people in and getting them enthusiastic about action-RPGs. And obviously, we offer some different things than they all do, so we’re happy to have the crowds.”

Runic hopes its design decisions with Torchlight II will interest more people even with Diablo III and Borderlands II as alternatives. “Instead of trying to have a secure economy, which is 100 percent cheat-free and makes you be online all the time, we decided to be more open with our architecture,” said Schaefer. “We let you play offline single-player. We let you use the same character between single-player and Internet-playing, and we also have local area network play, so you don’t even have to have the Internet to play with your friends. And we’re releasing our development tools with the game to encourage the modding community to come up with cool new variants. The other thing we offer is the $20 price tag. It makes it kind of a no-brainer purchase because the risk is so low. And because our game runs on pretty much anyone’s machines — it’s got very low min specs — I think we’ve got a lot of things lined up to attract a lot of people.”

The developer has used the past four months to make the game even better. “We’ve basically been content-complete for a couple months now,” said Schaefer, “What we’ve done is gone to the beginning of the game, went to each boss battle and champion battle, and made sure they were really fun and unique. [We] made sure all the areas were spawned correctly with the right variety of monsters, that skills were all interesting, and that it was playing up to what we wanted it to be like.”

Runic also implemented feedback from the community and beta participants from the spring — revamping the skill system based on players’ preferences. “It’s all this time at the end of the project where you put the extra polish into it that makes all the difference,” said Schaefer.

Schaefer joked that he’d deal with the onslaught “by drinking heavily,” but in relation to Torchlight II, he said, “You take seriously what people are saying about your game, and you try to look back at what you’ve done and see if there’s something [where] you can put out a patch and fix it. But one of the cool things about our game is that we are releasing our mod tools with the game, so if people don’t like something about it, it’s something that can be fixed pretty easily.”