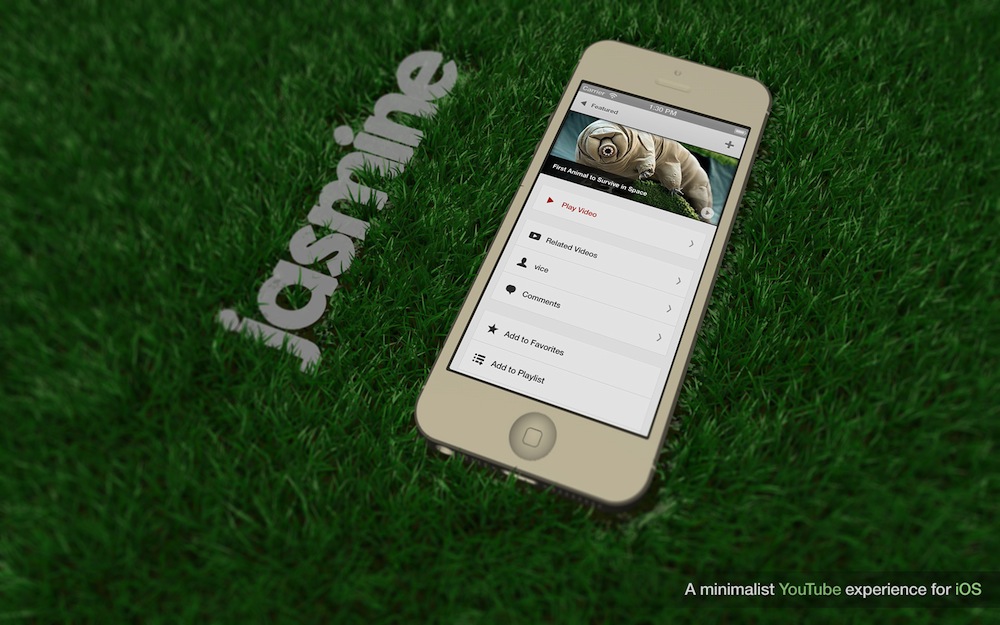 With Apple’s iOS 6 update, the native YouTube app is getting removed from iPhones, iPads, and iPod Touches. To remedy this, you can either download Google’s new official YouTube app for the iPhone or go with a gorgeous third-party alternative like Jasmine.

Jasmine was developed by Jason Morrissey, who is best known for creating the extremely popular Alien Blue Reddit client apps for the iPhone and iPad. His work on Alien Blue was so good, it actually surpassed Reddit’s official mobile app. (Seriously, even the site’s founders ended up preferring it.) And like his previous work, Jasmine aims to offer a mobile solution that surpasses what’s already out there.

“It’s a far lighter project than Alien Blue and doesn’t carry a lot of bells and whistles, but it may serve as a simple alternative,” Morrissey said in his initial Jasmine announcement. In my opinion he’s being very modest, though.

The app itself offers a clean interface that includes nearly all the same functionality found on the YouTube website. The focus is obviously on searching/browsing for videos, as it’s the first button that appears when you pull up the app on your phone. Yet, you can also easily access your playlists, viewing history, favorite videos, and subscriptions.

Overall, Jasmine just has a simpler navigation as well as a few nice perks that improve upon the original YouTube iPhone app. For instance, there’s a flower-shaped icon at the very top of the screen that allows you to toggle the night mode on and off, (basically allowing you to switch from a white background to black). Jasmine also offers a greater level of control on how it functions as well, with options to determine video playback, appearance, parental controls, and more.

Jasmine’s video player isn’t much different from Google’s official app. The biggest difference is that instead of simply giving a video a thumbs up/down, you can add a five-star rating to it. I’ve emailed Morrissey to find out why he chose to go this route, but since he’s based in Melbourne, Australia, his responses are understandably delayed.

Jasmine is available for free in Apple’s App Store, and will work on any iOS 6 compatible device. Morrissey did