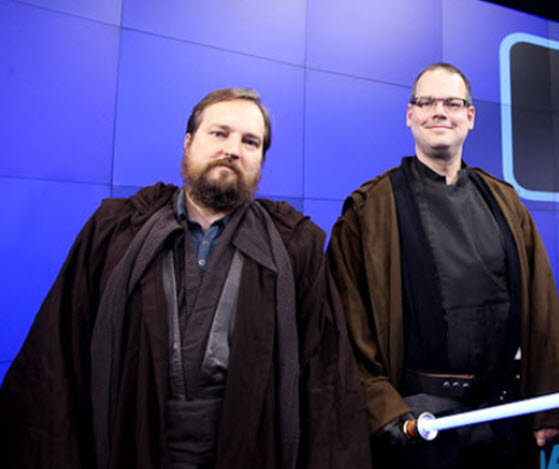 It was a momentous week for gaming, as Sony announced a new, smaller PlayStation 3 and Nintendo revealed its Wii U lineup. Gamification went mainstream at Salesforce.com. It would have been easy to miss one of the most emotional events the game industry has seen this year: the retirement of BioWare cofounders Ray Muzyka and Greg Zeschuk from the video game business.

The good doctors are out, finally, and the industry is in a kind of mourning about that. Their titles, like the Mass Effect sci-fi series, have sold millions of units and generated billions of dollars in sales. But that’s not the reason to remember them. No, it’s because they were nice. Win or lose, they knew that it was about how you behaved along the way. And their retirement reminds me that for all of the words I have written about the video-game business, it’s rare to be able to write about people who are truly interesting, genuine, and well-liked characters — even after they’ve risen to the top of one of the industry’s biggest corporations. This column is a tribute to two of the most successful and well-behaved Jedis in the industry.

Of course, it’s easy to say that they were much-loved based on their public behavior. It might be an altogether different thing to face them in a closed-door meeting and tell them that you were missing a crucial deadline in finishing a blockbuster game. I don’t know how they behaved inside BioWare or within the upper ranks of EA management. And I never witnessed how they behaved in the presence of their families. All I can say is that, based on what I knew about them publicly, they would have been interesting to meet socially.

Everybody seemed to like “Ray and Greg,” the friendly and polite Canadians from Edmonton. You could say that nice guys are boring. But Muzyka in particular was a pretty good poker player. They always made sure to speak highly of their teams and drove them to be passionate about creating video games that were not just ways to pass time. They wanted to elevate games to be as “emotionally engaging” as movies, books, or music. They pushed their people to create art and to never skimp on quality. And one of their corporate values was “humility,” the doctors were fond of saying. When I interviewed them on multiple occasions, they were always warm and casual. They received pointed questions as the doctors that they were, intellectually sparring with their interviewer. They were like scientists, always asking what I thought of their games and what stage I was at in them. That accessibility and conversational approach made me want to play their games and finish them.

You could tell something was different about them. After all, they were doctors. Medical doctors. They liked playing fantasy role-playing games so much that they quit those jobs to start BioWare. They created early titles like Baldur’s Gate I and II, Shattered Steel, and Neverwinter Nights. They stepped up to the big time as they made a huge bet on Microsoft’s entry into the video-game business with the Xbox. They created memorable titles like Star Wars: Knights of the Old Republic and Jade Empire. As they did so, they retained the titles of co-CEOs. They kept those titles even after they sold BioWare to Elevation Partners and then remained co-CEOs until recently under EA’s management. Most of the time, they did their interviews jointly, and they didn’t engage in mean-spirited trash talk. They kept a partnership going for more than two decades. That is a remarkable feat in an industry that has seen so many developers come and go.

They bet on Microsoft in backing their young producer, Casey Hudson, on the Mass Effect trilogy, which began as an exclusive for the Xbox 360. That team stepped up to create memorable stories and characters like Commander Shepard, who always had a moral dilemma to overcome as he sought to save the galaxy at great personal sacrifice. The Mass Effect series was where BioWare came into its own as a company of crafters that could create blockbuster games that actually shipped. The ability to repeat the process of creating and shipping great games is what made BioWare so valuable, and it spurred Elevation Partners to buy a majority stake in BioWare and Pandemic Studios for $300 million in 2005. EA bought BioWare/Pandemic in 2007 for $860 million.

Pandemic proceeded to fall apart. But the BioWare side of the company thrived with the launch of titles like Mass Effect. BioWare became a material part of a publicly traded company that had investors to please and targets to hit every quarter. As BioWare grew and made more decisions based on commercial potential rather than just artistic enterprise, the good doctors no doubt ran into their own dilemmas within the walls of Electronic Arts.

When Mass Effect debuted, I reviewed it for the San Jose Mercury News. After about eight hours with the sci-fi shooter, I gave up and wrote about how the three-way team play just didn’t work for me. My companions were just worthless, and I played it pretty much as a shooting game. Lots of readers piled in and explained that I was an idiot. I had played the game wrong, failing to realize that you could freeze the action and assign tasks to the companions that could easily change the outcome of combat. After they pointed that out, I went back to the game, completed it, and gave it a much better rating. I still argued that the game made it a little too easy for me to go down the wrong path. I was pilloried in the process on the Internet, and it was a humbling experience for a seasoned reviewer.

But the reaction from the doctors was kind. When I talked to them about it, they said that my review had taught them something. I’m sure they weren’t happy with what I wrote, but they didn’t say that. They said they appreciated the second piece and instructed their team to draw lessons from my gaming experience. They made it easier to learn the proper way to play in Mass Effect 2 and said that I had influenced how they designed the sequel. A lot of other people had no patience for me — loudmouth that I had been. But the doctors didn’t drop the hammer on me, and I appreciated that. After all, they seemed to recognize that journalists are people, too. And my experience was probably similar to a lot of other gamers’ out there.

If they had just worked on Mass Effect, they would have been assured their place in the video-game developer pantheon. But in parallel, BioWare began work on an extremely ambitious game, Star Wars: The Old Republic. Built in Austin, Texas, the title was aimed at expanding the massively multiplayer online game business beyond the fantasy theme of World of Warcraft, which has 10 million paying subscribers and generates more than a billion dollars a year in revenue for Activision Blizzard. The Old Republic seemed like a home run, tapping the brand that George Lucas created and mixing it with the role-playing game expertise at BioWare. It was a giant game, taking more than six years and a team of hundreds to complete. The budget was an estimated $200 million, which is up in the range of a heavy-duty Hollywood film. As the project grew and they added more responsibilities, the doctors had to manage sprawling teams. When Star Wars finally shipped in December, it seemed like gaming had passed it by, and it didn’t garner the audience that EA had hoped. It is still making money, but EA has shifted from charging subscriptions to making the game free to play. The challenge of doing that and cutting back on the size of those teams as tough times hit the studios this year undoubtedly took its toll on the BioWare founders.

About six months ago — after shipping Mass Effect 3 and Star Wars — Muzyka decided to retire. So did Zeschuk. Most of us get to live one life and have one career. These guys have already done two, as doctors and video game developers. It was discouraging for me to read Zeschuk’s own acknowledgement that, after some grueling years putting out games such as Star Wars: The Old Republic (six years in the making), he reached “an unexpected point in my life where I no longer have the passion that I once did for the company, for the games, and for the challenge of creation.” He acknowledged that he had run out of gas.

The doctors followed their dreams and found ways to entertain and keep us emotionally engaged at the same time. Now they’re moving on to their third lives. Zeschuk is going to dedicate some time to his family and microbrewery. And Muzyka wants to be an entrepreneur in the field of social entrepreneurship, or investing for the greater good of some cause. Naturally, they exited the classy way, with nothing but good things to say about EA, their teams, and their bosses.

I salute them for a job well done. Somebody should tally up all of the games their teams created and how many millions of them were sold. Then again, that’s the wrong score card. Somebody just ought to say how nice they were and hope that their behavior will truly inspire a generation of game developers to behave as they did. These nice guys didn’t finish last. They finished on top of one of the biggest companies in the video-game industry.