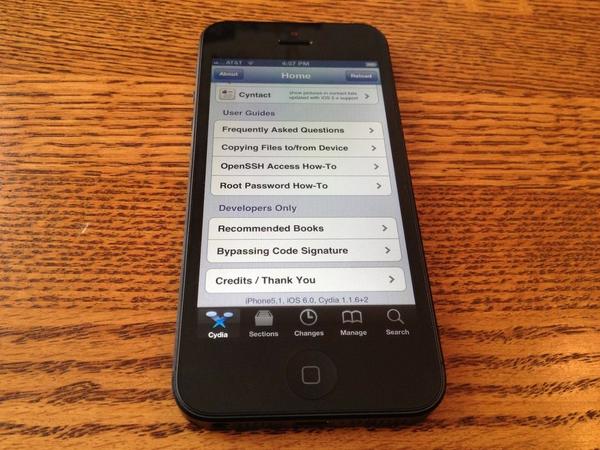 “Taller screens like Cydia too,” Paul tweeted, referring to the Cydia app store for jailbroken iPhones, and including a screenshot of his iPhone’s home screen.

It could have been an easy Photoshop job, but Paul has a good reputation in the jailbreaking community. He’s one of the co-authors of a 2011 hack that enabled Siri on jailbroken iPhones. He also runs a site that helps people jailbreak their iPhones. Paul posted additional images to back up his claim: one screenshot showing the Cydia store screen, plus a photo of his iPhone.

Here’s the Cydia homepage on the iPhone 5: pic.twitter.com/w0qVYaxG

Paul hasn’t posted details on his jailbreak, and other hackers don’t seem to have replicated his work yet. Still, as one commenter wryly noted (and Paul retweeted), it suggests that iOS 6 is vulnerable to zero-day hacks.

Some people wanted the bottom row of text from Cydia, or a photo of the device itself: pic.twitter.com/T5mSNTNQ

We’re working to get more details on the jailbreak and will follow up as we learn more.