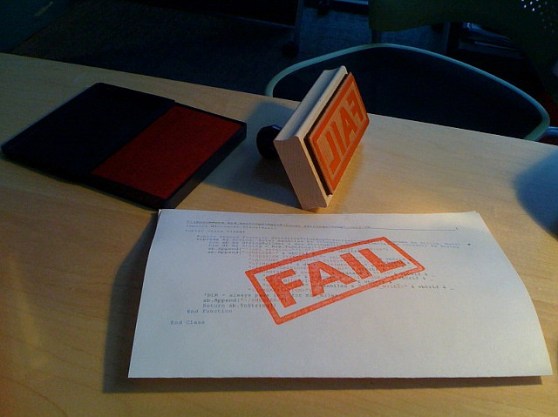 Renowned author, creator of the term “Stipster,” and seasoned also-ran Adam Fletcher examines why the F-word is so taboo in the startup community…

Have you seen that M. Night Shyamalan film about the people who live in a clearing in the woods? The one where they live like it’s the 1890s? They don’t even have Twitter. It’s all terribly quaint. Anyway, the kicker is that they’re chased by these scary red creatures that come out from the woods. I think. I don’t remember it all that well. Only in the end, [SPOILER ALERT] it turns out there are no monsters, they are just chasing themselves, in red coats. There’s a powerful metaphor in there.

What I found interesting is that they don’t refer to the monsters by name, instead calling them “that which we do not speak of.” The startup world has its own “that which we do not speak of” – failure. This has improved in recent years, particularly in the US, but we humble Europeans still have a great problem in honestly sharing our failures. This is not a good thing.

We tend to live by a simple rule:

But why shouldn’t we talk about failure? Well, it does tend to be quite the buzz-kill. Plus, why would anyone be interested? It didn’t work. Why is it detrimental to society when we don’t share our failures? Why is it wrong to have a media obsessed with reporting and analysing the every brainfart of the “successful”?

The reason is obvious – when we don’t share our mistakes, no-one else can learn from them. As a result, collectively, we waste a huge amount of time, money and our sanity making the same ones again and again. I’ve heard it suggested as low as five per cent of scientific research ever gets published. The successful five per cent. Who wants to publish unsuccessful research? Who would be interested in a failed experiment? Well, people also planning that experiment, you’ve just saved them a lot of time and money.

Nice one, you big loser. Just because it didn’t work for you, as you hoped, doesn’t mean that there isn’t a small piece of that failure directly relevant to someone else, the last piece of a particularly problematic puzzle that they needed, which solves something they’ve been working on, which will make their future research successful. On this note you may have heard of ResearchGate, who have an office in Berlin and are aiming to tackle this very problem, by connecting scientists together into a giant, nerdy, Facebook for atom-splitters. Already 1.9 million scientists have signed up for the service.

Everyone is making money online – not true

The other problem is that we create an information vacuum. In the spaces where our failures should be laid bare, where there should be cautionary tales, we stay silent. In this vacuum rushes the sharks and the shameless. The internets snakeoil salesman, who purport to earn $3000 an hour with some foolproof internet ponzi schemes, in which they are kind of enough to sell us all the secrets of their success from never-ending sale letter pages, for the low, low price of just $24.99. Today only.

So from a distance it seems like everyone is a success. Everyone is making money online. This, in turn, puts more and more pressure on us and only heightens the feelings of inadequacy and shame when we try something and it doesn’t work. Everyone else is successful, why not us?

Plus, I think we’re really bad at understanding success, here are some reasons:

93 percent of US car drivers believe they rank in the top 50 percent of drivers. 25 percent of SATs exam-takers estimated themselves in the top 1 percent. This is often referred to as the Illusory Superiority effect – we have a tendency to think very highly of ourselves, higher often than our own meagre talents. This is why, when asked to reflect honestly on our business successes, we might exaggerate the role we played in achieving them in the rush to blow our own tuneful trumpets.

The world has the regrettable habit of being rather complex. It’s like a giant puzzle with eight million pieces, for which we’ve misplaced the lid and all the corner bits. Humans have the regrettable habit of being, while well-intentioned, rather simple. Collectively, we’re smart enough to put men on the moon, individually, we’re so busy working, eating, sleeping, thinking and losing our socks, that a day in which we don’t forget to shower or lose any of our children in the supermarket is already considered a moderate success.

Because of our short attention spans and busy lives, we’re very bad at dealing with lots of complex data. The media knows this and that is why it’s so good at breaking everything down into binary opposites for us – Tories vs Labour, Democrats vs Republicans, Terrorists vs Freedom, Capitalists vs Communists. When there are just two options, we can handle that just fine. It’s like a football match, even if you don’t know who’s playing you can always just cheer for whoever’s winning.

Retrospective Simplicity works the same way, only it’s related to events of the past. It’s what happens when we look back and try to dissect something as big, complex and as multi-faceted as business success. It’s why we tend to attribute success to specific individuals and are so attracted to the idea of the solo genius. Apple is a runaway success because Steve Jobs was a visionary. That’s true. But it’s not why Apple is a success. It’s just easier than trying to break down and make sense of a massively complex web of interlinking factors and dependencies at play in a multinational company of some 47,000 people, in which Steve Jobs was a highly influential part.

In the same way we oversimplify success as being very personal, a direct result of our herculean efforts and intellects, we treat business failure as equally personal. It failed because of us. Because we didn’t work hard enough, didn’t come up with an idea good enough, just weren’t smart enough to make a success of it.

It didn’t. Once you’ve been around people who’ve started a business or two, you realise that’s all just nonsense. Starting a business is more art than science. More guesswork than knowledge. More optimism than rationalism. There is no blueprint. It’s a lot about hard work. It’s a lot about adaptability. It’s a lot about encouraging serendipity, more commonly known as being in the right place, at the right time. It’s a lot about luck. Luck is to business, what foreplay is to sex – while not strictly mandatory it sure makes the ride smoother.

So get over it. It’s not on you. It just didn’t work out that time. Don’t delete all evidence your project ever existed. Document everything, a leave it online as a digital tombstone. You’ll have learnt a lot, dust yourself down, collect up your bruised pride, take a couple of months off to recharge, go again. There’s nothing quite like the experience.

Of course analysing failure suffers some of the same problems as analysing success. You’re still trying to make sense and draw conclusions from complexity. But failure should be sobering. It should remove a lot of the ego from the analysis. We can’t rationally conclude something failed because we’re visionary geniuses. Rationally. And so in our analysis of failure there should be a greater chance we’ll reach meaningful, practical insights and lay out the likely booby traps awaiting the next guy.

Yet no-one has built a service where we can do that. There is no reason why if you’re thinking of starting a new business you cannot go online and read clear, tangible problems that others faced when starting a business in that niche. Not sob stories of co-founders falling out or the world being not being ready for their genius. I’m talking about specific, tangible problems previous businesses in the same area had, which you will need to solve. Something like – Admittingfailure.com but focused on tech and not NGOs.

Put down the self-help book…

Contrary to popular belief, business is not a zero-sum game, for you to win, someone else does not have to lose. Once we accept that, the idea of helping everyone, whether we succeeded or failed, becomes a no-brainer.

The specific cocktail of circumstances that allowed the successful to succeed has gone now. Often for the unsuccessful, the idea was great but other factors, be it societal or technological were not right. Maybe the time has come for someone to execute properly on that idea.

Sergey and Larry, Steve Jobs, Warren Buffett, Marc Zuckerberg, these are unlikely to be relevant business role models to you at this stage. Their secrets may offer solutions, probably not to your current problems. It is very unlikely to be relevant to your life what successful people do the first hour of every day. You’re probably building a small internet business (as I suggest in my last article). Your role models are people who’ve already tried to build a similar small business. The good news is, they’re everywhere.

Put down the self-help books, stop searching for hacks, secrets, blueprints, gurus, experts and guides. Find someone who’s built something similar to what you’re planning, whether it succeeded or failed and go meet them. In real life. Understand what specific problems they had at each stage, then plan for them, or if they’re common, create a service to help solve them. Then share your experiences back to your niche and know that if it doesn’t work out , know you’ve still just as much good advice to give, so give it freely.

For related articles, check out:

This story originally appeared on VentureVillage, one of VentureBeat’s syndication partners.