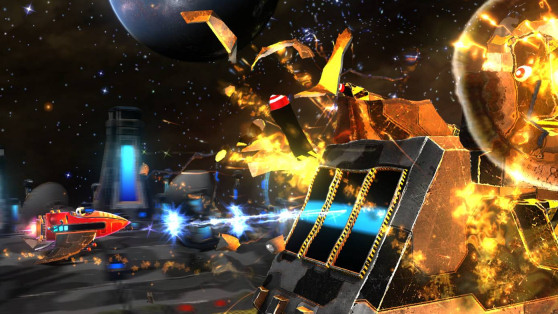 What makes a music game? A lot of different elements can go into it — a sense of rhythm, harmony, and even a “pulse,” or the beat that governs the entire game. But not everyone perceives the genre the same way, including developers.

Part of that is because of how far we’ve come over the years. Not only has music in games become more dynamic — from background noise to an integral element of gameplay — but it’s created new genres. Since then, the form has evolved to allow more room for creativity and fresh ideas. It’s not just about hitting the right notes. These games can be a vehicle for capturing decades of a franchise, a way to give a world a unified theme, or even a twist on space shooters.

We reached out to some of the hottest designers and composers to find out how they define music games — and what about the world of sound inspires them.

Music is part of the fun of games

Hazama said the heart of these games is “the exhilaration that you feel in the beginning. The methods of expression change depending on the game, but what’s at the root of it all is not much different from the feeling of humming your favorite song.

“I listen to many different genres of music, but I am influenced the most by songs that I listened to when I was in my teens. As for what game, the impact I received from playing Parappa the Rappa was the big one.” 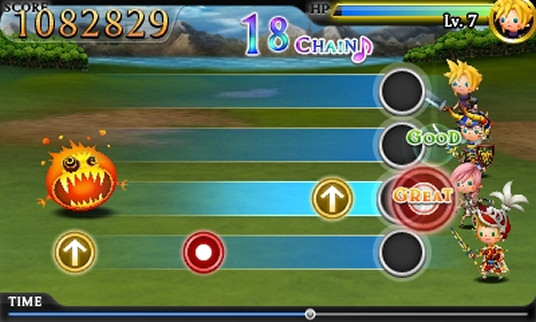 It’s about being expressive

“The power and potential of video game audio to create vibes and sharpen player’s perception is no secret,” said the designers of Superbrothers: Sword & Sworcery EP. “Some games are more explicitly musical, and some present mechanics or themes directly connected with sound creation. Typically, these types of experiences are referred to as ‘music games’ … but at Superbrothers, the ‘music game’ concept isn’t particularly useful. Would Katamari Damacy or Jet Grind Radio be considered a ‘music game’ even though their mechanics aren’t explicitly about sound creation? Who cares! With us, what we enjoy is a game with a musical soul, where sound is intentionally and interestingly expressive. …

“For Sworcery, some our inspirations on the music side include Jim Guthrie, Grails, Basil Poledouris, John Carpenter, and Zombi. On the video game side, we often referred to Metroid, The Legend of Zelda, Another World, and Ico.” 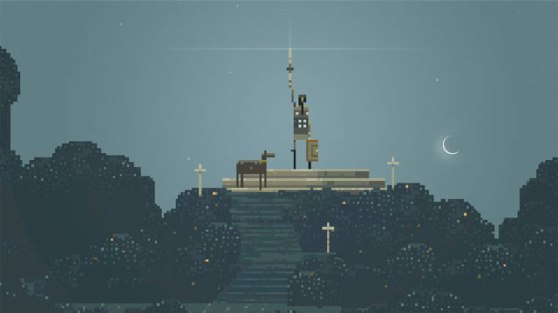 Another developer had a simpler take. “The real heart of a music game is the music!” said Matt Gilgenbach, the cofounder of 24 Caret Games. “Even if the game plays more like another genre, as long as the music is a core part of the experience, it’s a music game in my book.

“My very favorite music game is Samba de Amigo for Dreamcast,” he said, “and it was an inspiration for me when developing Retro/Grade. Samba de Amigo is pure fun. It doesn’t focus on emulating a musical performance but creates an amazingly enjoyable experience shaking your maracas. Rez is an inspiration, as well, because it makes you really feel like part of the music.” 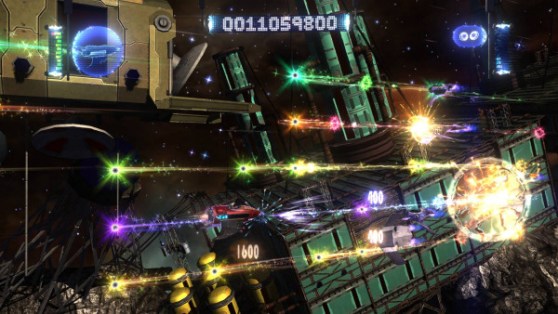 “All games are music”

To David Kanaga, the composer for Dyad (from developer Right Square Bracket Left Square Bracket), music games aren’t necessarily any different than regular ones. They’re “composed music with fluid variables — all games are music,” he said. At their core are “sounds and time-structures from love rather than work.” 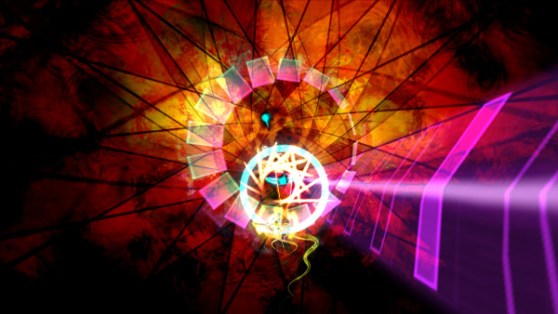 The game and music change together

“I would say a music game is a game that treats music as the core — or part of the core — gameplay experience,” said Matt Shores, the cofounder of Empty Clip Studios. “While my definition is broad, I do think that there must be some core gameplay link. For example, a game that has great background music that might have inspired the mood or visual look of a game is, in my humble opinion, not necessarily a music game. However, if that music changes the action of the gameplay, or if the user — by her actions in the game — changes the music dynamically, I would consider that a music game.

“Also, I think it’s fair to say that a rhythm game is a music game, but not all music games are rhythm games — nor should they be judged as such.

“For most creative designers,” he said, “a music game comes from a very, very deep love or influence from music. While it is true that most game designers have some kind of ‘soundtrack’ or music playing in their heads while they create games, music games start with the concept that the music in integral to the game and not something that helps describe the setting, mood, et cetera. For Symphony, we used user music to create the game, so in a sense, our love of all kinds of music genres and types really drove the creative process and balancing.”

Shores said his inspirations are “Vib-ribbon, Audiosurf, Beat Hazard, Turba … I would also include a very influential sound game, Real Sound: Kaze no Regret. This game was created as an ‘audio-only’ experience for blind players. This style of gameplay is something I plan on experimenting with in the near future.” 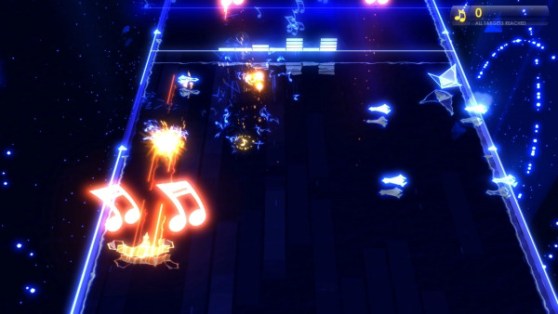 The way players affect the music is innovative

“As a baseline,” said Tak Hirai, the president and producer of Orgarhythm at Neilo, “[a music game] is obviously a game that you play with the sounds you are listening to. But above that, I personally would expand on that base and say that one’s play in a music game will create reactions within these sounds.

“The important thing is that there is a combination of ease-of-play and a gradual evolution of play style that combines in music games [that works] particularly well for emergent gameplay. This is relevant not just to games but as we approach the new devices of the future. People who have played these kinds of games will be better able to visualize a new and better way to interface with virtual worlds.

“I felt that the work we did in Shenmu was very well received by Western developers,” he said. “And it affected some changes in other games afterward. I would like to think I can continue doing that kind of thing in games going forward.

“I really like Groove Coaster as a music game — and while not a direct musical inspiration, works of art like Paul Klee’s Golden Fish. This painting shows the loneliness and the pure thoughts and actions that are natural to humankind. This is a source of creativity for my work.” 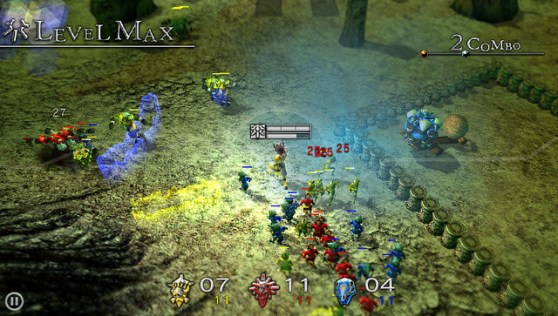 “A music game is an interactive experience that melds its gameplay with your music,” said Alex Dantis, the creator of Synesthetic. “The most important thing for a music game is its connection to the song. Together, they should feel like something completely new. If players end up looking for forgotten favorites among their music library so that they can experience and reinvigorate them through the prism of your product, then you’ve built a proper music game.

“I’ll be the first to admit that Audiosurf has been a big inspiration for my game, alongside a couple of other nonmusic games. As for music, you start with the genres that you love — [for me], IDM and Electronica — and end up trying everything imaginable. Toward the end of the development cycle, I was testing the game with death metal and K-pop.” 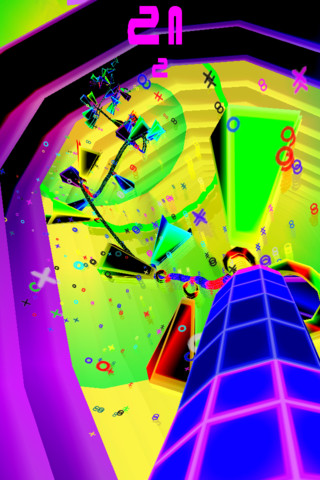 The controller is your instrument

“To me, a music game is one where the language of music is incorporated into gameplay,” said Shaw-Han Liem, the cocreator of Sound Shapes. “So we’ve seen many games that use rhythm — one of the building blocks of music — as a way to engage with players and create gameplay experiences. Of course, there are all kinds of other music concepts, like melody, harmony, orchestration, intervals, scales, timbre, synthesis, et cetera. Any of these could be used as a basis to create a cool game!”

“I don’t know,” said Jon Mak, also cocreator and founder of Queasy Games. “I don’t think making distinctions like this is useful. Say a game doesn’t deal with chords, intervals, rhythm, or anything, but music plays an integral part in the game. Maybe listening to it gives you a clue in the game, or maybe without the music, the entire atmosphere of the game is lost. In this case, is it still a music game? Does it matter?”

“I think at the core of theses games is the game designers expressing their love of music and trying to engage it in a way beyond simply listening to it,” said Liem. 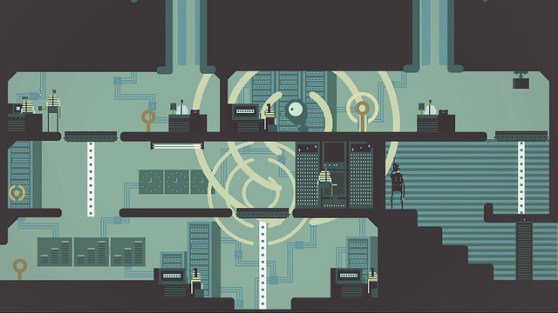 “Playing music and playing video games are actually very similar activities,” said Mak. “In both, you are providing inputs with a controller — the instrument — to create outputs. In the case of music, the inputs might be strumming a guitar, pushing a key on a keyboard, turning a knob on a synth…which produces some musical output: a note, a chord, or a synth effect. In games, the only difference is you input via a controller, and the output is [graphics], sound effects, and possibly music. So it’s not a leap to simply tie the outputs of a video game to music. After you do that, you begin to realize that maybe music and games share the same core together.”

“For me, the big influences in the game world are Tenori-on, Electroplankton, and Rez,” said Liem. “We also get inspired from innovative music software and hardware as a whole — it’s not specifically game-related.”

“There are so many [inspirations] to list,” said Mak. “I’d add Rhythm Tengoku. But there are some games that aren’t necessarily considered ‘music games’ but whose music makes up an integral part of the game — for example, Lumines or Dyson. There’s too many to list them all.”