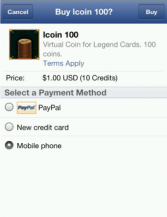 Making purchases via Facebook’s mobile app is about to get a whole lot easier.

Mobile payment and analytics company Bango is bringing its payment system to the Facebook app. Announced in February, the integration will allow users to pay for purchases via their cell phone bills.

With the move, Facebook and Bango aim to make it easier for users to make purchases, which should in turn mean that users will make more of them. (According to Bango, 77 percent of purchases initiated via its system are completed, which is a pretty significant metric.)

That’s a big deal for Facebook, as it could mean more cash for the company in an area that’s not advertising.

With the integration, Facebook joins BlackBerry App World, Opera Mobile Store, Google Play and Amazon — all of which use Bango’s system in some form.

While the new system will initially work only in Germany, the UK, and U.S., Bango plans to bring it elsewhere by the end of the year.