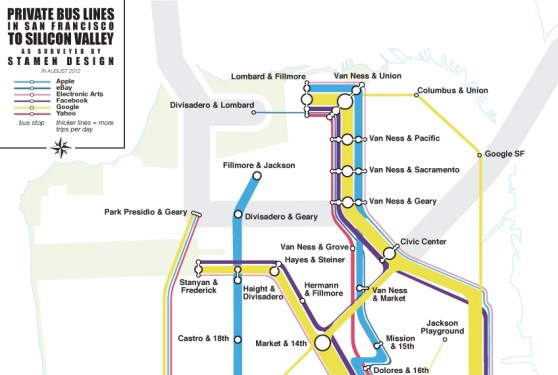 If you live in San Francisco and work at a tech company in Silicon Valley, you probably take a shuttle to work.

Google, Yahoo, Apple, Facebook, eBay, and Electronic Arts all operate shuttles that go up and down the San Francisco Peninsula every workday. It’s a substantial employee benefit: You can live in culturally-rich San Francisco, surrounded by young, well-off techies like yourself; you get to work in the heart of Silicon Valley where the biggest and best-paying companies are located; and instead of spending hours a day driving, you pass the time in air-conditioned comfort.

Companies win, too: With Wi-Fi on these buses, employees can start working the instant they hop on the bus instead of waiting until they walk in the door an hour later.

Stamen estimates that the number of people taking these shuttles is huge: over 14,000 people per day, or 35 percent as many as train service Caltrain, which also runs between San Francisco and Silicon Valley.

That could be a sign that something is not working with public transit. If so many companies are forced to pay buses to carry workers to and fro, it’s probably a safe bet the existing train systems aren’t convenient enough.

On the other hand, at least those 14,000 people aren’t driving their own cars up and down 101 and 280, adding to traffic congestion and pollution.

The story of how Stamen assembled this visualization is pretty cool. Its researchers used a site (and open-source project) that Stamen created called Dotspotting to collect information about the locations of shuttle stops around the city (using information from Foursquare to help it ID locations). Then it sent field workers out into the city, riding bicycles and armed with data-collection forms created using another Stamen site, Field Papers, which simplifies getting field notes in the proper geographic locations. Then the notes were scanned (or camera-phoned) and imported into a database.

Finally, Stamen designers assembled and massaged the data until they had a good sense of the main shuttle routes and the volume of passengers on each.

The resulting visualization is on display at the ZERO1 Biennial Exhibition, “Seeking Silicon Valley,” in San Jose, through December 8.

Via Waxy.org and All Things D