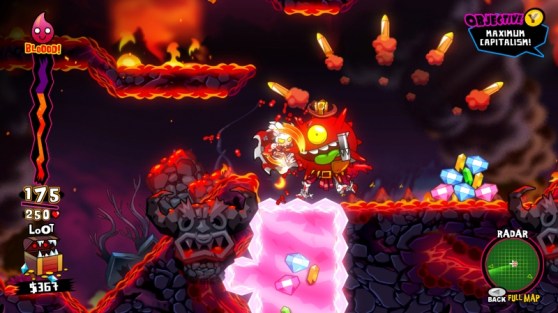 Hell Yeah: Wrath of the Dead Rabbit requires you to accept a few unusual premises. First, that the ruler of the underworld is a skeletal rabbit named Prince Ash who is a bit of a nudist with a thing for rubber ducks. Second, that someone in the year 2012 thought it would be a good idea to resurrect the trend of animal mascots with attitude from the ‘90s … and do it well.

These days, games that try to mimic a retro aesthetic are almost as common as those that don’t, but the point of reference is nearly always placed precisely on the Nintendo Entertainment System and Super NES. Developers want to tap into the happy memories of games like Super Mario World because they’re an almost universally beloved experience, but even back in the ‘90s, people were trying to replicate that feeling … or put their own spin on it. Characters like Sonic the Hedgehog and Earthworm Jim exist because if the companies behind them couldn’t beat Super Mario, then they would at least be cooler than him.

This is the tradition that Hell Yeah and its Prince Ash come from. The game isn’t the best — it’s not a new generation’s Mario World, and it knows that — but it tries to make up for it with a style and attitude that gives off a distinctly Sega Genesis vibe (as telegraphed by the old school “Seeegaaa” noise at the beginning). Hell Yeah avoids the cheeriness and bright colors of Nintendo games in favor of black comedy and a juvenile sense of humor that is very reminiscent of what you would see in titles created as a response to Nintendo’s output (like the aforementioned Sonic and Earthworm Jim). It’s not family friendly fun, it’s “Look how fucking dumb that family friendly fun is. I’m so much cooler than that.” It doesn’t always work, but Hell Yeah captures this oft-ignored mainstay of ‘90s platformers so well that it’s worth recognizing.

The gameplay is bizarrely solid

You spend most of your time in Hell Yeah riding a giant saw blade that also functions as a jetpack and has a gun on it. Even for a game in which you play as a skeleton rabbit who is the prince of hell, that’s pretty out there. In the beginning, the saw can literally cut through most of the enemies and obstacles that you come up against, but as the campaign goes on it becomes more of a platform for your increasingly wacky weapons, especially once the game introduces electrified and metal enemies that you can’t slice through.

Killing these adversaries involves some kind of puzzle, either environmental or tactical, but the finishing blow always requires completing a Wario Ware-style minigame of some sort. Some are as simple as a quick-time event and others feel like slightly more elaborate iPad apps.

The thing about all of this stuff is that works just as you’d expect it to, as if the developers at Arkedo threw everything at the wall and all of it stuck. The saw cuts through things, the guns feel different enough to justify constant swapping, and the jetpack is easy enough to use that it never feels like you’re wrestling with the controls or physics to make a particular jump. 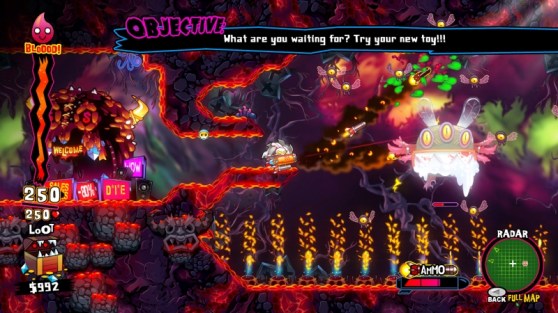 It’s an amalgam of every game ever

Hell Yeah is a platformer at heart, but it also features elements of a twin-stick shooter and a puzzle game. The developers have structured the levels in a way that requires Metroid-esque exploration and backtracking, and killing monsters involves the aforementioned minigames.

Also, you sometimes get to fly a spaceship, and the game actually becomes a twin-stick shooter, with you dodging asteroids and shooting enemy ships while managing your fuel supply. And in a few levels, your saw blade turns into a giant wheel, and you get to fly around and do tricks with it. Not to mention the multiple submarine levels with multiple submarines…. Basically, Hell Yeah takes some small aspect from any number of other games and combines it with some other small aspect from some other game and makes it work.

You can wear a fez, and fezzes are cool

I’m a sucker for being able to alter a character’s appearance in any way, and if you’re anything like me, you’ll have a lot of fun with Hell Yeah’s customization options. The game has loads of hats for Ash to wear and a few different skins for his saw blade. Some are hidden in the levels, and you have to earn some by completing secret challenges, but you can unlock most of them with the money you earn killing monsters.

It would almost qualify as a spoiler to specifically lay out some of the crazier options, but let’s just say that for a good portion of Hell Yeah, I was playing as a skeleton rabbit dressed as Peter Fonda from Easy Rider while riding a donut with a grenade launcher mounted on the side … and it was so awesome.