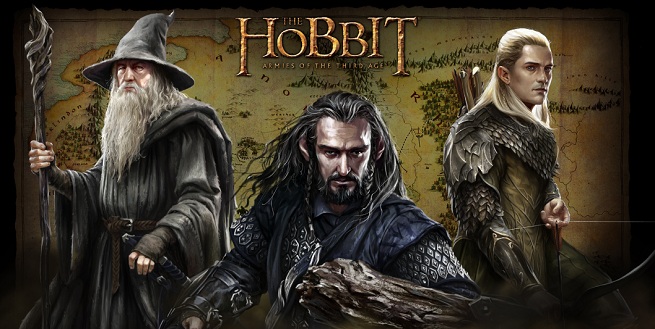 In a partnership with Warner Bros’ game division, game maker Kabam will make social and mobile games based on Peter Jackson’s upcoming The Hobbit film trilogy.

The deal is a big step up into well-known entertainment properties for San Francisco-based Kabam, which has made social and mobile games mostly under its own new intellectual properties. But The Hobbit, loosely based on the classic novel by J.R.R. Tolkien, is expected to be one of the most  important movie properties of all time, given the prior success of Jackson’s The Lord of the Rings movie trilogy.

Kabam will make two multiplayer strategy games that will be free to play, where users play for free and pay real money for virtual goods. Hobbit: Kingdoms of Middle-Earth will debut on mobile devices. The Hobbit:  Armies of the Third Age will debut on web browsers. Both will launch in the fall of this year. Starting Sept. 25, players can sign up to take part in the upcoming beta for The Hobbit: Armies of the Third Age.

The Hobbit trilogy is being made by director Jackson and produced by New Line Cinema and Metro-Goldwyn-Mayer Pictures. The first film, The Hobbit: An Unexpected Journey, debuts Dec. 14. The second film, The Hobbit: The Desolation of Smaug, opens Dec. 13, 2013, and the third film, The Hobbit: There and Back Again, will be released July 18, 2014. The films are based on a single novel by Tolkien, but Jackson is taking artistic liberty in adding his own material. The movie, for instance, includes the elf character Legolas, who appeared in the Lord of the Rings but never in the book version of The Hobbit.

“The Hobbit films are among the most anticipated entertainment launches of all time,” said Kabam CEO Kevin Chou. “Kabam’s unique ability to blend the art of game design and the science of free-to-play distribution makes us a natural fit to partner with Warner Bros. Interactive Entertainment.”

“Kabam’s [games] will be an excellent way for The Hobbit film fans around the world to … interact with the characters in the universe,” said senior vice president of digital games for Warner Bros. Interactive Entertainment Greg Ballard.

The Hobbit: Kingdoms of Middle-Earth will let players build and manage their own kingdom in Tolkien’s world. Chris Carvalho, chief operating officer of Kabam, said that the games will be based on Kabam’s existing engines, such as Kingdoms of Camelot: Battle for the North. But the games will have original elements and will not be simple “re-skins” of existing titles, he said.

Chou told us recently that Kabam generated more than $100 million in revenues last year, and Bloomberg reported that Kabam was considering its options for an initial public offering. Carvalho confirmed that an IPO was an option in an interview with GamesBeat.

“This move [into licensed brands] is a logical progression for a company like ours,” he said. “We’re so excited to work with Warner Bros. on this. The web game will be a mixture of a tower defense game with lots of new features. It will incorporate characters in the films. We’ll leverage the engines we have used before and build upon them. The films have very high production values, and we’re very passionate about doing this work.”

The Hobbit: Armies of the Third Age is a browser-based game where gamers lead an army of Elves, Dwarves, or Orcs. The players control heroes including Bilbo Baggins and Gandalf the Grey. The game will involve “fast-paced strategic combat,” but Kabam has not otherwise described it or released screen shots. Carvalho said the lead designer on Kabam’s The Hobbit games is Haden Blackman, who was the executive producer of LucasArts’ renowned hardcore PC and console game, Star Wars: The Force Unleashed. Kabam has been working on the games during the past year.

Chou co-founded Kabam in Redwood City, Calif., in 2006. The company has since moved to San Francisco and has more than 550 employees. Kabam’s other successful titles include Dragons of Atlantis, Edgeworld, and Kingdoms of Camelot.

“We’ll have other interesting games coming down the road,” Carvalho said.