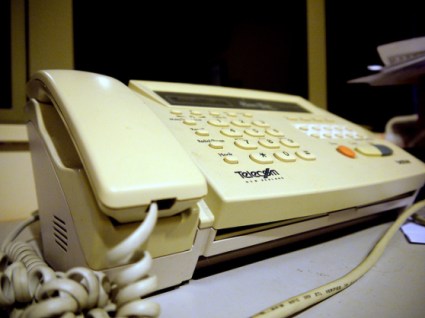 Fax machines, your days are numbered.

That’s according to a recent LinkedIn poll that asked respondents to name the technology they thought would be obsolete within the next five years.

Unsurprising, fax machines were one of the top choices, one spot behind tape recorders and one ahead of the Rolodex. LinkedIn Connection Director Nicole Williams said this was no big surprise. “Some people still think the fax machine is a relevant form of communication. It’s not,” she said.

Williams said LinkedIn created the poll to help figure out if the Internet is changing the way people are applying to jobs. (The career-focused social network’s stake in this should be pretty clear.)

The assumption, of course, was that the popularity of services like LinkedIn would render resumes obsolete sooner rather than later.

But, ranked at 14, resumes came out surprisingly low on the list, which means that, while LinkedIn wouldn’t mind if they went away, most job seekers don’t feel the same way.

LinkedIn’s survey also asked respondents what technology they thought would soon take over the office. Their response:  tablets, smartphones, and cloud storage. No brainer, right?

More significant, though, was that many respondents were pretty confident that the rise of more portable computing devices will also give rise to flexible working hours and a stronger reliance on telecommuting and video conferencing.

“The key message that we got is that the world is changing. It’s becoming more flexible,” Williams said.