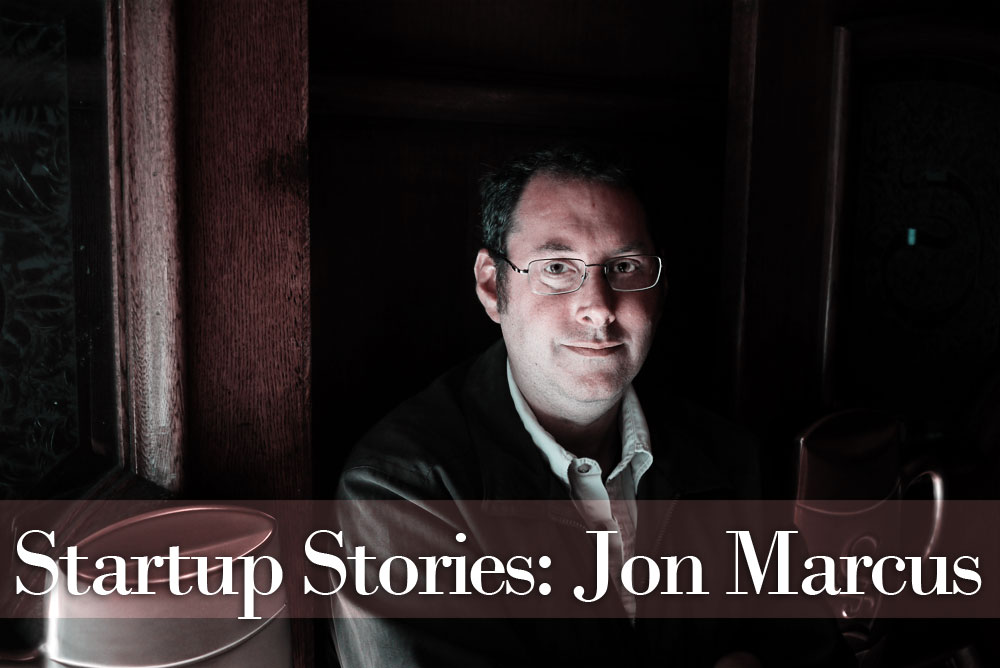 Jon Marcus has been doing tech recruiting for longer than most web companies have existed — 15 years, all in Silicon Valley and San Francisco — and he still says the most interesting, challenging searches are akin to detective work.

Software engineers, he tells me, are the hardest to find.

“They like to hide,” he says. “Marketing people, sales people, product people will network. Engineers, they’re very timid about giving out contact information for themselves or anyone else.”

Marcus and I are having an intense conversation about one of the biggest myths in the tech industry — that good engineers are almost impossible to find — at a German brewpub in the depths of San Francisco’s Financial District skyscraper cluster. It’s not the most appropriate meeting place — I don’t drink, and Marcus never combines alcohol with business. But as I nurse a half-rancid alcohol-free beer, Marcus explains things I’ve always wanted to know about startup culture and why hiring is so dysfunctional at tech startups.

“It’s the fear of the unknown,” he says. “Everyone is afraid of hiring the wrong person, and if they would just trust that they know how to ask the right questions, then everyone wouldn’t be complaining as much about recruiting.”

But instead of asking the right questions and hiring a candidate who’s qualified, Marcus says that startup founders will take a candidate in based on a personal recommendation or an impressive company name on a resume, usually branching outside the original specification they wrote and usually regretting the decision in the long run.

Marcus pauses frequently, interrupting his passionate explanation of the job he truly loves to express doubts about how potential clients might interpret his words. He’s been doing this work since the height of the (original 1990s) dotcom boom; he’s seen all kinds of companies come and go, win and lose. He’s interviewed Ivy Leaguers and dropouts; and as a result, he has helped shape countless “A teams” and every other kind of team, then watched those teams suceed or fail. If anyone in this town knows what value a resume or pedigree or candidate holds, it’s him.

And the truth he’s seen in the past decade is that our insecurity is getting the best of us. “The big problem in general is fear,” he says. “To counter their fear, companies make their standards too high and turn down people who would be great at their jobs.

“Everyone wants the next Steve Wozniak to walk through the door, but really, they should be asking to see if they can do the job. … They want to populate their entire staff with engineering geniuses, and you don’t need the whole staff to be engineering geniuses. You need a couple really bright people who know what they’re doing, and then, just don’t turn down people who can do the job.”

“Oh, there’s definitely a shortage of people as the tech industry expands,” Marcus says. “The economy is expanding here, and they need a lot of engineers. You just need more and more people to code all this stuff.”

But again and again, he points out that qualified engineers do exist, and they’re being shut out of companies for what amounts to a cultural stigma about what sociologists would call “the other.”

Marcus comes from New Jersey. He says his East Coast heritage gives him an edge that’s uncomfortable for some West Coast types, and he worries that after talking to me so frankly, his truth-preaching won’t go over well with potential clients.

I find his candor refreshing. The startup community can be a very “nicey-nicey” place to exist. But painful truths are always more profitable to hear in the long run than insincere platitudes.

The first computer Jon Marcus ever laid his hands on was a mainframe. In high school, he tells me, “We learned to code BASIC with computer punchards. There was also an huge AT&T operation in Berkeley Heights; they offered C programming classes.”

After school, Marcus went into sales. Then the Internet happened, and everything started shifting. By the late 1990s, Marcus was living in San Francisco, conveniently at the nexus of the tech world. He didn’t move here for the tech (“I wanted to live in a city where I didn’t need a car and it doesn’t snow,” he tells me, “and this is the only city in the U.S. where you can pull that off”), but he stayed for it. Two years into his life in San Francisco, he started working with startup people.

“I liked the expansion of technology that I was seeing,” he says. “During the dotcom boom, I met a bunch of people, and I started recruiting finance and accounting people in the tech industry. … Everyone was looking for a comptroller, director of finance. It seemed like every other dotcom company needed someone to run finance.”

Marcus dove into the deep end of recruitment then and there with no formal training. He briefly considered working at a recruitment agency, but he learned that he’d still be responsible for booking all his own clients and sourcing candidates. “I can do that on my own without losing half my money,” he decided.

In learning how to find and hire tech people for startups, Marcus found a career that required a lot of activity and engagement; each search amounted to a hunting expedition.

“I always like detective work,” he says in our interview. “I think creatively, and I’m not afraid of picking up the phone and networking. I never used Monster to find resumes. I would read what was going on in the news and call companies — which I still do when I see companies that get funding. Sure, every reruiter out there will hate me for this, but most recruiters don’t do that.”

The great mystery and the core principle of recruitment, Marcus says, is at once simple and nearly impossible: Find a better candidate. The elusive “better candidate,” he tells me, can come from anywhere. She can be lingering at the bottom of a Craigslist feed; he could be at a networking event. Someone might answer an advertisement. The only predictable part is that you can’t predict where the better candidate will come from this time.

“Sometimes it takes months to find someone that’s perfect for the job,” Marcus says. And while he hints that he has a few secret resources up his sleeve, he tells me that it’s never as easy as signing up for a resume board subscription. 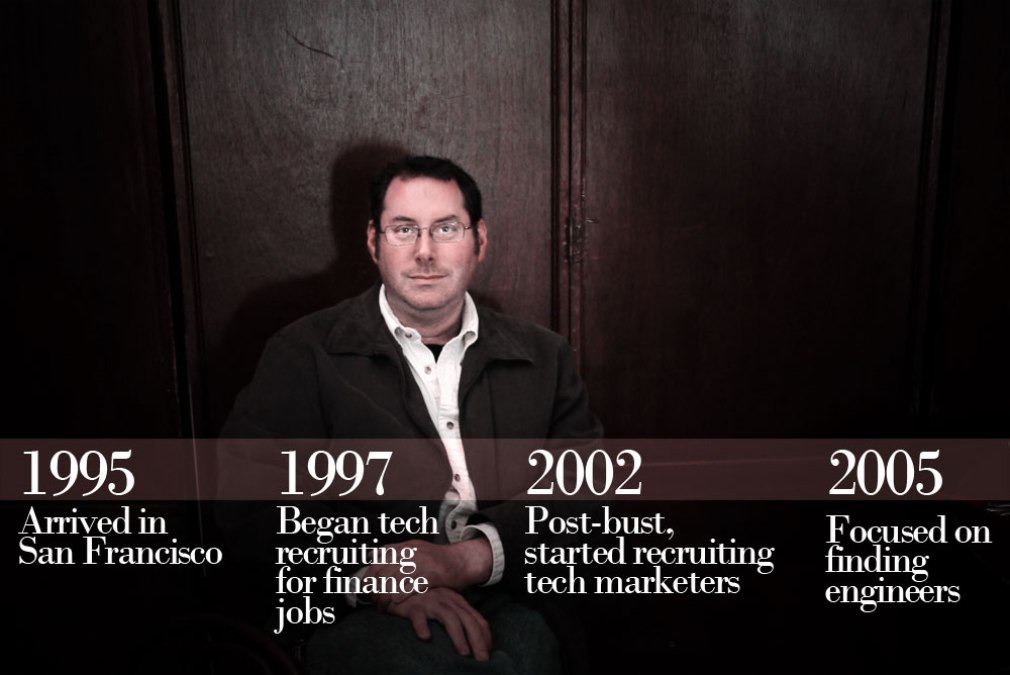 As quickly as the world shifted toward the web, it shifted away from it. The dotcom bust, Marcus tells me, pretty much destroyed the recruiting business he had built.

“It killed it,” he says abruptly. “I worked with startups, and they were all defunct.” But like others who survived the collapse, Marcus pulled through.

“I saved money when I was making it. It’s all a blur; you do what you have to do. I found that most of my friends were not really friends.”

Then in 2002, along came the Sarbanes-Oxley Act, also known as the Public Company Accounting Reform and Investor Protection Act or the Corporate and Auditing Accountability and Responsibility Act, mandating new accounting practices for publicly traded companies. Suddenly, every accountant in town had a job, and startups couldn’t compete.

Marcus refocused his practice on sales and marketing personnel. In a downturn, sales and marketing meant more than ever for lean companies that needed to make money — real money from real customers — or at least prove they had the potential to do so.

In 2005, Marcus refocused again, this time turning to the most enigmatic puzzle of all startup job descriptions: the engineer. For a recruiter, and especially in the competitive hiring environment that exists now, hiring engineers is something like the struggle depicted in Hemmingway’s The Old Man and the Sea: very few really big fish and a whole bunch of sharks circling to take the catch of the day out of your boat.

“Recruiting is really, really psychological,” he says. “The people running the companies are great at product, great at coding, great at organizing a business, but recruiting is a lot of psychology. It’s balancing fears.”

Marcus understands those fears more than most, he tells me, because he’s been in a hiring manager’s shoes, as well.

“I tried to start a business once, a social music business, and I don’t code,” he says. “It made me see the other side of the story. The people I talked to, I just did not trust them. One guy said he wanted 70 percent of the company. It was really interesting to see it from the other side of the fence. Until you get there, you don’t really know.”

So Marcus now has to take the same type of fear and mistrust from a founder and balance it with opportunity and reality. One founder, he says, refused to see any candidates who didn’t hold degrees from Ivy League schools.

“He turned down everyone who came to him. We had to tell him, ‘You’re going too far. Shakespeare and Gallileo didn’t go to Ivy League schools,'” Marcus says.

Another story he told revolved around a founder obsessed with the idea of high moral character in his candidates. “[He] would ask them about their personal lives even back to high school. One time a candidate called me after their interview crying because of this. … She told me she was kidnapped in high school and his questioning brought up all those memories. I talked her out of suing the company.”

The founder just wanted the assurance that his company would be in good hands, that he wouldn’t get screwed somehow by an employee. But there’s no real assurance of that, Marcus implies, no matter what questions you ask or how far back you dig.

“There’s always risk, and if it’s your company, you ultimately have to make the decisions. Maybe they don’t trust themselves.”

Our talk turns to “culture,” one of the sacred dogma of most startups I meet with these days. Culture, I note, is often used as an excuse for, say, overwork, desk-drinking, inappropriate fraternization, and other counterproductive and unhealthy office behaviors. I speculate aloud that culture may serve as a convenient excuse for certain hiring practices as well.

“Too many startups treat their business like it’s a frat,” Marcus says, “when in fact, someone’s invested a lot of money, and the founders have invested a lot of time, and they’re there to make money on a product.”

And when your sole goal is to make money, you stop worrying about things like age, race, or even gender; tech becomes a meritocracy. Hypothetically, at least. Marcus says that in his own vast experience, even when presented with highly qualified candidates, founders still seek the familiar, possibly out of insecurity or fear. “They want to find someone they’re comfortable with,” he says.

Marcus has hit on the crux of one of Silicon Valley’s biggest problems, one that countless groups and corporations and funds and individuals are working right now to correct — especially when it comes to gender. Not a day goes by that we don’t hear about some new initiative to find and help more female entrepreneurs or engineers or investors. But the institutional discrimination lingers on.

“I’m sure it happens all over the world,” Marcus says, resigned to playing his role in the play but obviously dissatisfied with the plot. “It doesn’t happen all the time, but with some people.” After discussing a couple cases in particular, he tells me that especially when it comes to clear-cut cases of ageism, “Most people are afraid of [filing a lawsuit or discussing the issue] because Silicon Valley is small.”

I ask him, who loses in the long run — the wrongfully overlooked candidate or the company that still “can’t” find a good engineer.