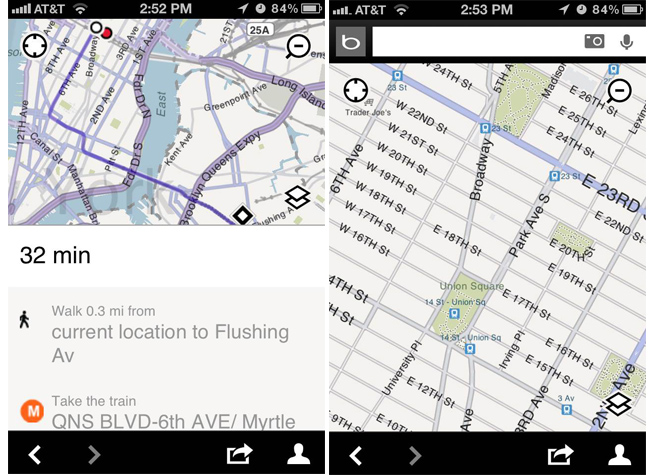 With so much animosity toward Apple Maps, Microsoft would like to take this opportunity to remind you that its Bing app for iOS includes Maps and it’s a pretty decent app all around.

The company writes in a lighthearted blog post today:

It’s the time of year when new phones are hitting the market. You may be holding a brand-new smartphone and wondering which apps have the essential search and mapping functionality you need. Well, you’re in luck, because Bing has you covered. For years we’ve put a lot of work into helping people find what they need so they can get more done. With the Bing App for iPhone, we can help you find what you need and help you get there –- whether it’s down the street, on the other side of the world, or somewhere in between.

Microsoft actually has a point. Apple Maps isn’t getting much better any time soon, and a native Google Maps app isn’t coming for a least a few months, so Bing Maps is a decent solution. It’s especially good if you need public transit directions, something that has irked the many city-dwellers running iOS 6.

While the Bing app isn’t as exhaustive as Google Maps, it could be a lifesaver if you’re one of the many who have been given bad directions or don’t want to use separate mapping and public transit apps.

Microsoft has not updated the Bing app for the iPhone since April 30, and the company has indicated it has no immediate plans to update it further. The latest version of the app has an average of 4 stars from 382 ratings.

Let us know what you think of the app in the comments below.