BriefMine, a startup launching today, wants to make access to legal research more cost-effective. It is one of only a handful of legal tech companies using technology to push the boundaries of legal practice.

As we reported, it takes guts to tackle the legal tech space. The challenges include old-fashioned regulations and constant push back from the target market. And yet, notoriously underfunded, it’s a huge market opportunity that has been untapped by Silicon Valley’s venture capital firms and angel investors.

Burdened by decades-old technology, the legal industry is ripe for disruption. One of the recent shifts that has taken place in the legal industry is that most lawyers don’t work at stuffy, corporate practices. Today, roughly three-quarters of 1.2 million lawyers in the United States work at small firms. These lawyers struggle to afford costly legal research tools like Lexus Nexus and WestLaw.

For legal tech entrepreneurs, this is an opportunity for a simpler, cheaper alternative. “It has historically proven a tough nut to crack,” BriefMine’s founder, Harry Zeitlin, told me. “By creating a high technology platform at a very low price point, we are paving the way for further, and much-needed disruption, which will ultimately benefit legal providers,” he said.

The company has developed a database filled with legal briefs and opinions. For lawyers, relevant information will surface using a simple query-based, natural-language search. Briefmine says the beta product is already being used by 100 lawyers at small firms, and advisors have jumped on board from firms like Wilson Sonsini Goodrich and Rosati, a favorite for tech companies. In the future, it may compete with TraceLaw, a San Francisco-based startup that is building a case law search engine. 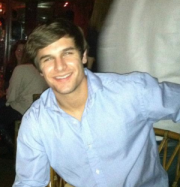 Above: Harry Zeitlin, Founder of BriefMine

In future, BriefMine plans to make money by charging law firms for the service on a subscription basis and creating a section of the site where lawyers can advertise their own content and collaborate with other lawyers.

BriefMine was founded in June 2012 and has grown to a team of five employees. Founders Zeitlin (pictured, left) and Gabe Lupin attended Stanford University together; lead engineer Jigar Gandhi is studying for his LSAT and plans to attend law school so has an established interest in the space.

According to BriefMine, the idea originated during a conversation with an attorney at a small law firm. “He [the attorney] mentioned that briefs would be invaluable to preparing his argument, but that the fees associated with these services were exorbitant,” said Zeitlin.

The San Francisco-based startup is a bootstrapped effort, and the founders are looking to raise their first round of funding.