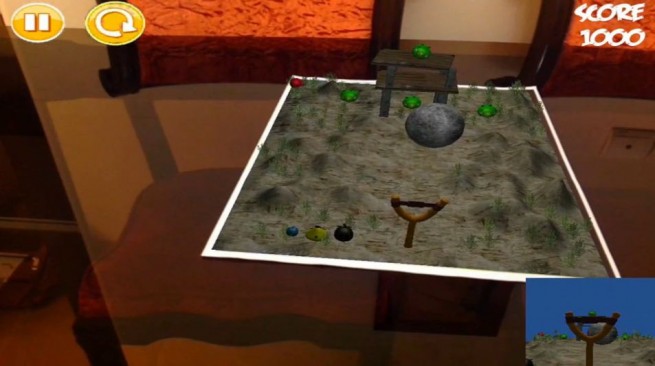 Angry Birds Space was OK, but it looks like an Iranian company has figured out what would make for a better sequel.

PenAR, a software company that specializes in augmented reality technologies, produced a very cool version of Angry Birds that makes it appear as if it is happening in 3D right in the room you’re standing in.

The app uses a technology called markerless augmented reality that lets a developer code in an image to use as a play field. In this case, PendAR (which means “Imagination” in Persian) used an Angry Birds poster as the computer-recognized pattern. The camera then reads the poster’s x-axis, y-axis, and z- axis and paints the 3D world on top of that.

“Just imagine, you can shoot the birds right on your desk,” PendAR CEO Mojtaba Tabatabaie told GamesBeat in an interview.

“We believe showing how this popular game, Angry Birds, would work with this technology shows people how much augmented reality could affect their lives in the future,” Tabatabaie said.

Take a look at the game in action:

Still, someone should get Rovio and PendAR together in a room to talk about this. I want to shoot augmented-reality birds into my ketchup during dinner time.