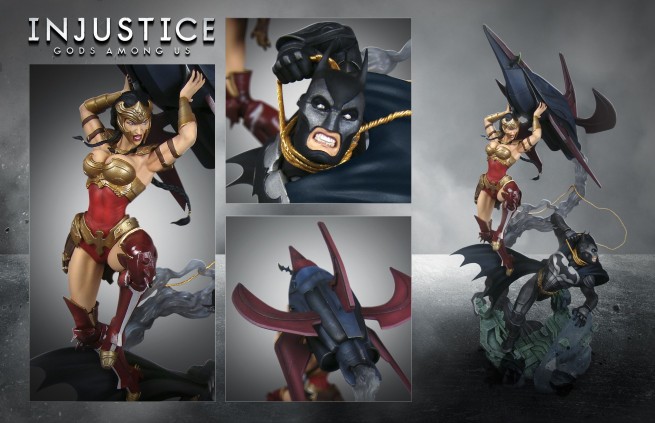 The Feng Shui in my entertainment den is slightly askew. I know! I just need a 13-inch statue of Wonder Woman kicking the crap out of Batman with a maniacal grin on her face.

The DC Comics fighting game Injustice: Gods Among Us is due out in April of 2013 for the Xbox 360 and the PlayStation 3. That gives fans plenty of time to pre-order the $99.99 Collector’s Edition of the brawler, which comes from publisher Warner Bros. Interactive and Mortal Kombat developer NetherRealms .

This special package includes an exclusive statue of Wonder Woman beating Batman with the Last Son of Krypton’s escape ship while standing on Superman’s Fortress of Solitude.

According to the press release, the bundle also includes a special version of “a brand-new DC Comics series.” We’ve asked DC Comics for details about the book, and we’re awaiting its response.

NetherRealms is also packing in a download code for the DC Universe animated film Justice League: Doom and three exclusive character skins for Batman, Superman, and Wonder Woman. Designers created those skins from imagery of DC’s rebooted The New 52 universe.