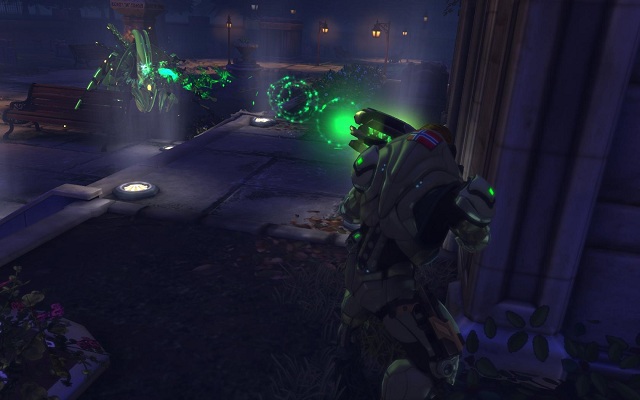 I remember playing X-Com: UFO Defense many years ago and losing all the time. I’d get that screen with the three-armed mutant man, and the game would tell me that the alien invaders had enslaved all of humanity.

Well, good. Screw ’em. I’d just been fighting the struggle of their digital lives when their incompetent governments cut off funding to the only organization (i.e., mine) trying to do anything about their extraterrestrial visitors! Hell, in that last mission, I was rooting for the bad guys, letting veteran soldiers stand in the open so I could watch them melt into little bloody pixel piles.

But just cheering for evil isn’t enough. Sometimes, I want to be the bad guys. I want to lead the invasion personally and bring our species to its knees. It’s a fantasy that I’m not alone in sharing — just see these fan projects that aimed to implement a full role reversal: UFO: The Two Sides (now defunct) and UFO 2000 (its developers are still working on the feature).

So finally, after almost two decades, we’re getting XCOM: Enemy Unknown, a spiritual reboot, which will do just that; albeit, from a multiplayer-only perspective. Hey, I’ll take what I can get! I’ve been fooling around with a preview build of the game for the last week, and you can read about my initial impressions of how the turn-based tactical portion feels in a single-player campaign. Here’s a look at how head-to-head matches might go. 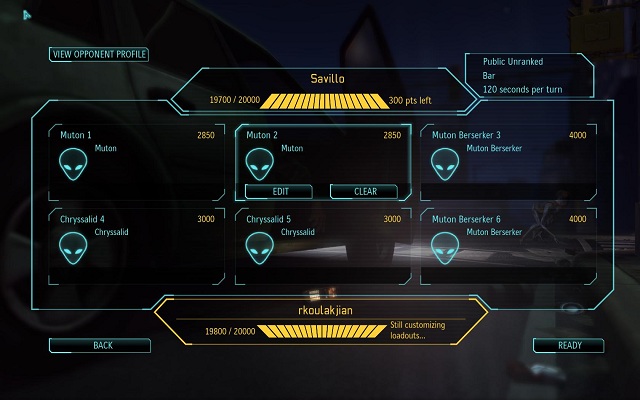 Using a points system, Enemy Unknown lets you choose both aliens and XCOM soldiers to form a six-unit squad. Psh. What do I look like? One of those chumps who play free-for-all on the Aliens vs. Predator servers? Come on! Just as I wouldn’t raise my pulse rifle against a fellow Colonial Marine, I wouldn’t tolerate internecine warfare within XCOM’s misfit group of starfaring invaders. My multiplayer partner and I will be choosing distinct, opposing sides.

Obviously, I’m taking a squad of Martian scum. For this match, I load up with two Cyberdiscs (strong tanks that resemble tiny UFOs), a Drone (a small robot that fills a support role), and a force of deadly Chryssalids (a creature that takes inspiration from the nightmares of H.R. Giger but falls more on the Tyranid side of the aesthetic). You can read more about the types of aliens and XCOM soldiers in GamesBeat editor-in-chief Dan Hsu’s detailed write-up.

Since I have a lower total point count for my forces, I get to take the first turn (although, I like to think that our extraterrestrial cunning gave me the initiative). I have 120 seconds on the clock to finish positioning my six units while developing an overarching strategy. It’s a tense 2 minutes.

Our skirmish is over an abandoned bar, which is one among five available maps in the preview build. (And now you know the dirty secret of the alien invasion — we ran out of good beer and lost the recipe. Shhh!) I take advantage of the Chryssalids’ incredible movement speed and close the distance between each map corner by about three-quarters. I leave them hiding out on the roof, waiting for the right moment to strike. 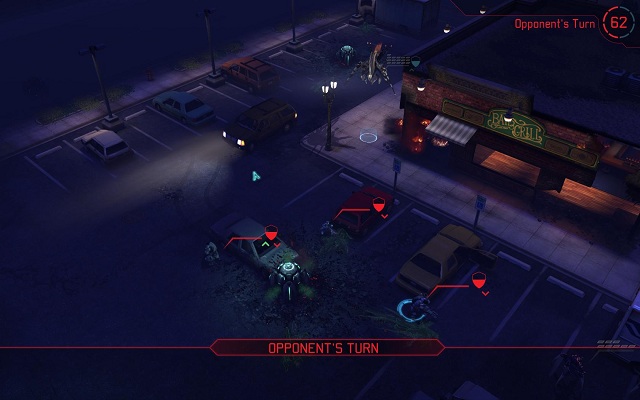 The Cyberdiscs take point around the right side of the building, with the Drone following since it can repair its robotic allies. Here’s where I stumble, though.

Cyberdiscs are flying units, but instead of UFO Defense’s simple system of just altering the visible elevation and selecting where you want to go on a horizontal plane, Enemy Unknown requires that I activate “flying mode.” OK, done. But something’s not quite right. Try to imagine discerning the cursor position in three-dimensional space without depth perception. Yeah. It’s a mess. So I don’t quite get the Cyberdiscs into position, and I’ve wasted a lot of time messing with vertical movement.

I had the same problem in an earlier match with Floaters, which are surgically enhanced flying creatures. Normally, you can hold the right-mouse button to see all possible move locations, but that doesn’t work while in flying mode for whatever reason (when it would be most useful!). You also can’t see how far you could go by taking both actions at once as you can while on the ground. Developer Firaxis needs to tweak this.

Movement issues aside, once I finally round the corner, we see a squad of heavily armed and armored XCOM soldiers waiting for us behind the cover of some cars. Here’s where I can finally enact my dark fantasy of conquering those human weaklings. While one Cyberdisc transforms and lays down some weapons fire, the other moves in close to use Death Blossom. Taking inspiration from the original — where a Cyberdisc would explode upon its demise — this ability targets all enemies in a close range and initiates a sort of shockwave attack. 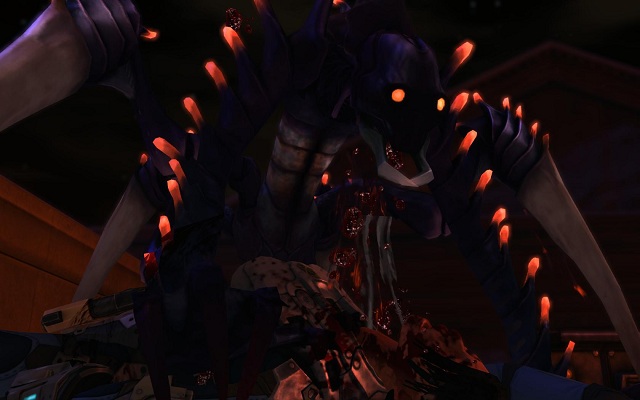 At the same time, my Chryssalids jump down from the roof and surround the XCOM team. Their ability comes into play now: When one kills an enemy, it will implant a fast-growing embryo into the cadaver … which will then rise from the ground as a zombie! Hell, yeah. After a few turns (or if shot down sooner), a brand-new, fully developed Chyssalid will emerge. Talk about two for the price of one.

My strategy decimates my opponent’s squad, leaving me the victor.

This is just a sampling of what’s possible. In other matches, I used the Sectoid Commander (think little gray men) to control the minds of hapless XCOM soldiers and turn them against their comrades. I used Floaters to flank the enemy with their Launch ability, which lets them take off and set down anywhere on the map. I used the Muton Berserker to smash through cover and charge directly at cowering XCOM rookies all in a single action.

And on the other side of the coin, leading Earth’s finest against the looming alien threat is much more entertaining when you have a friend commanding their ranks.

XCOM: Enemy Unknown releases for PC, PlayStation 3, and Xbox 360 on October 9. The demo is available now on Steam. 2K Games provided GamesBeat with a PC preview build for the purpose of this article.