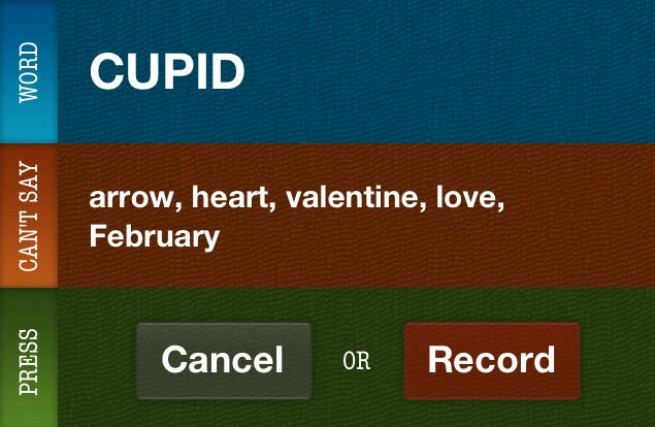 AOL wants your ugly mug and your phone’s front-facing camera for a new social game for the iPhone.

Clucks is a turn-based social word-puzzler that’s a lot like that party game Taboo. It gives you a word and five associated, forbidden descriptors, and then you record a 12-second video (social-video company Viddy is aiding AOL with that) for a second player to guess what you’re trying to communicate.

As this second player tries to name your word, the game records him. When his round is over, you can watch the both videos side-by-side.

I know what you’re thinking: “But what will prevent lame cheaters from saying any of the forbidden words.”

That’s where a dragon comes in.

Well, at least, the Dragon voice-recognition software from Nuance Communications. Many people already use Dragon to dictate speech to their computers. AOL is using it to recognize when Clucks’ users try to score some easy points.

“No one has captured the trend for social video sharing in mobile gaming yet,” said Sol Lipman, vice president of Mobile First at AOL, in a press release. “By leveraging the fun of short-form videos, integrating Nuance’s Dragon voice recognition to deter cheating, and partnering with Viddy to enable sharing, we have created a first-of-its-kind app that’s fun and different.”

AOL also announced that it is working with Sony Pictures to have some of their stars record Bonus Rounds for users. The two media conglomerates are still ironing out the details, but just imagine playing the game when your next round comes from Edward James Olmos or Alf (AOL cannot confirm the involvement of either of these amazing actors.)

“We’re thrilled to have Sony Pictures on board to help us launch Clucks,” said AOL entertainment sales director Karin Mihkels. “The game offers partners, especially entertainment partners, a unique opportunity to feature their brands and get their talent in front of an active, mobile, and social user base in an easy, fun, and organic way.”

Are you listening, Alf? This is best way for you to get back out in front of the people.

Clucks is available now in Apple’s App Store as a free download.