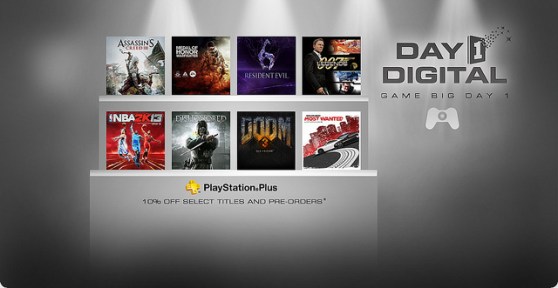 A console maker may be starting to understand digital releases after all. Sony announced plans this week to offer downloadable games on the same day as retail — and at a lower price — with the PSN Day 1 Digital service.

Sony doesn’t have a great history when it comes to selling digital versions of retail games. Anyone who owned a PSP Go felt that heartache. Games were often released late or not at all, and that upset many of the fans who owned the handheld. It’s not clear whether this was a result of Sony not being aggressive enough with third parties or if the company simply didn’t care. That may be changing.

Offering games digitally on the day of release may open a few doors for Sony. The discount could mean a rise in PSN game sales and PlayStation Plus subscribers (which is what they want). However, retailers may not take kindly to the idea of Sony undercutting their sales, and they will have to find their own ways to offer the more appealing product. It’s either that or just be happy selling PSN cards.

“Sony can’t really help itself more with the publishers, as they all like Sony a lot. I think that this runs some risk of alienating retail,” says Pachter, adding that retailers may retaliate by cutting back on in-store advertising. “They might find retail uncooperative with point-of-sale display and promotion if the download business becomes a meaningful part of the overall sales.”

I asked Pachter if he thinks Sony’s push for digital distribution could lead to timed exclusives or content, but he says, “I don’t see how this gets Sony any more exclusive content as it’s not really that leveraging for retailers.”

When asked whether such a service will earn Sony more PlayStation Plus customers, Pachter said, “I agree that the value proposition of PlayStation Plus is enhanced by the discounts, but I don’t see how … people who are not yet [subscribers] will suddenly join just because full game downloads are available.”

That said, it’s important to note that all of the announced releases, which are only a fraction of what will be available in October, arrive on a Tuesday. That’s the usual PSN update day. We’ve contacted Sony to ask whether users will have to wait until a regularly scheduled time to begin their download. If that’s the case, that aspect won’t be very different from before.

Only a handful of games are available at the lower-than-retail price, and customers must subscribe to PlayStation Plus ($50 per year) and preorder the game to receive the discount. Other games will be available at a 10 percent discount to Plus members for the first week of release.

Previously, those who wanted to buy a game on PSN had to wait until the evening of a game’s release for Sony’s scheduled online store update. Not only were those consumers paying retail price, but they were waiting for the update and the extra download and install times, which could take hours. Because factors such as shipping, packaging expenses, and physical shelf space were out of the equation, consumers didn’t see the logic in purchasing a digital copy at full price when they could have the actual disc in a plastic box.

Meanwhile, rival console makers like Microsoft and Nintendo may take a cue from Sony in the future and offer appealing deals for customers going the download route. Microsoft already offers digital downloads of some games on the Xbox 360’s online store, but Nintendo only began selling downloadable versions of retail games this year.

Pachter thinks that both rivals will respond, but they will be more careful about it. “My view is that Microsoft is going to move very slowly here, and Nintendo even more slowly. The risk of backlash from retail is great, and I think both companies will wait to see the response. Sony offered Mass Effect 3 as a download day/date with the packaged game release, and Microsoft did not.”

The great PSN crash of 2011, in which the service went completely down from April 29 through May 14, could also affect gamers’ adoption of Day 1 digital. Some gamers forever lost trust in Sony’s capability to keep systems secure, but hacks happen. If anything, hacks of this magnitude are less of an issue than before, because we can all be sure that Sony now makes it a top priority to ensure that security on PlayStation Network is tighter than ever . Not everyone sees it that way, and many PlayStation owners will choose to stick to physical media for fear of sharing credit card information with an online service.

Sony recently announced a newer, ultraslim PlayStation 3. Perhaps in the hope of boosting digital sales, the company has upped the base model’s hard drive to 250GB and the higher-end SKU to 500GB.