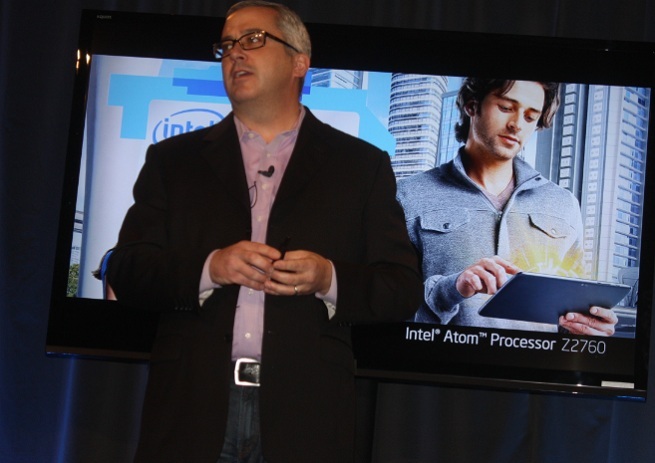 Intel showed off a bunch of tablets today that use its chips, in a sign that the world’s biggest chip maker is making progress in expanding from the PC to mobile devices.

Intel is trying to show that it is aligned on tablet strategy with Microsoft, which is launching its Windows 8 operating system for PCs and touch-oriented tablets on Oct. 26. (Intel chief executive Paul Otellini reportedly said at an employee meeting in Taiwan that Microsoft was shipping Windows 8 before it was ready, although Intel was quick to distance itself from the report). Intel and Microsoft view their new touch-based products as a counterattack against Apple and Android-based rivals that are stealing market share for computing away from the traditional PC.

Erik Reid (pictured above), general manager of the Apps Processor Division at Santa Clara, Calif.-based Intel, said, “We couldn’t be more excited about Windows 8.” He said the company has worked with Microsoft for years on the tablet-based hardware and software.

The new tablets are based on Intel’s Clover Trail generation of Atom processors, which bring PC performance to low-power devices like tablets. Devices based on the Intel chip can be as thin as 8.5 millimeters thick and can weigh as little as 1.5 pounds.

Among the computer makers showing off their Intel-based tablets were Dell, Hewlett-Packard, Asus, Lenovo, Acer, LG, Samsung, and ZTE.

In demos, Intel showed that normal PC applications can run seamlessly on tablets. The company showed Microsoft Office, PC games, and the full iTunes Store app running on the tablet, without modification. Productivity, creativity, and vertical market apps can all run on the tablets. By comparison, a lot of other PC apps have to be modified to run on Android or iOS (Apple iPhone, iPad, iPod Touch) devices.

“That’s why this is so cool and compelling,” Reid said. “It’s a game-changing experience.”

The Intel chip is officially dubbed the Atom 2760 and it runs at 1.8 gigahertz. It makes possible mobile devices that have more than 10 hours of battery life and run both Windows 8 or Windows 8 Pro software, Intel says. Shawn Yen, director of Asus product management, said on stage that the new technology from Intel will enable new kinds of tablets that can do more than the current machines on the market.

Tom Butler (pictured below), director of Lenovo ThinkPad marketing, said his company’s tablet will be easy to deploy in enterprises because it is secure and can be remotely managed by systems administrators using traditional PC software. It has a digitizer pen that allows you to write on a tablet as easily as you can touch your finger to the screen.

Paul Tayar, senior director of Acer Connected Devices Marketing, said that the shift to tablets is based on listening to customers and where they are headed in today’s increasingly mobile and instant-gratification market.

Patrick Moorhead, analyst at Moor Insights & Strategy, said, “Intel made tremendous progress with their first tablet SOC (system-on-a-chip). Few people, if asked a year ago about an Intel-based tablet, would have responded with specifications like 10mm thin, fanless, with good battery life. Intel’s value proposition for their new Atom tablet part will play well in the small but growing enterprise space, now targeted by Apple. Apple’s long-term enterprise tablet play was just dealt a severe blow by Intel with HP and Dell’s new commercial tablets.”

Bill Gordon, executive director of of Dell End  User Computing, showed off his company’s new tablet computer, the Latitude 10 tablet, that is based on an Atom chip and is geared for a business environment.

Fredrik Hamberger, vice president of HP’s PC global business, said his company created its HP Envy x2 laptop that has the same Atom chip, showing that the chip can run in both laptops and tablets. But the device can also be easily converted into a touchscreen tablet. You can pull the display off the device and use it as a tablet.

“We’re delivering a great tablet device and a great notebook experience,” he said. 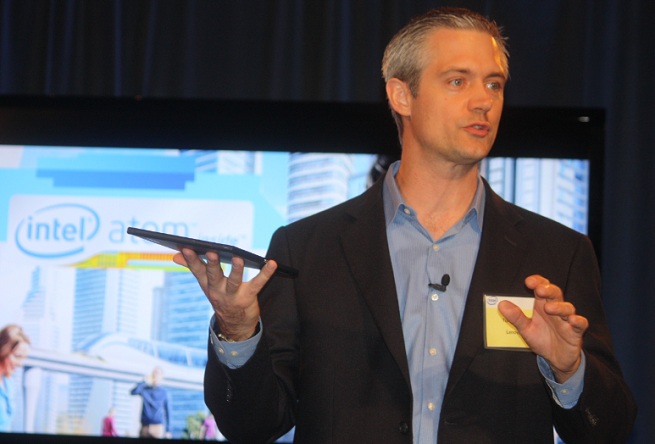