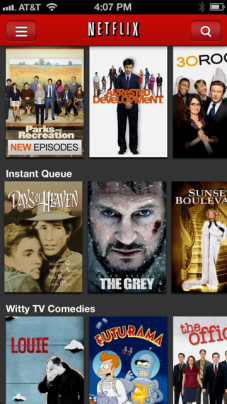 One of the unfortunate side effects of the iPhone 5’s taller screen has been that many existing iOS apps haven’t been optimized for it.

Developers, however, are rapidly moving to fix the problems, however minor they may be.

The latest addition to the list of iPhone 5-optimized apps is Netflix for iOS, which was updated today with support for not only iOS 6, but the iPhone’s taller screen.

Apps not optimized for the iPhone 5 have been letterboxed to compensate for the device’s tweaked proportions. Instagram fixed its issues on Monday, and the iOS Facebook and Twitter apps were supported from day one.