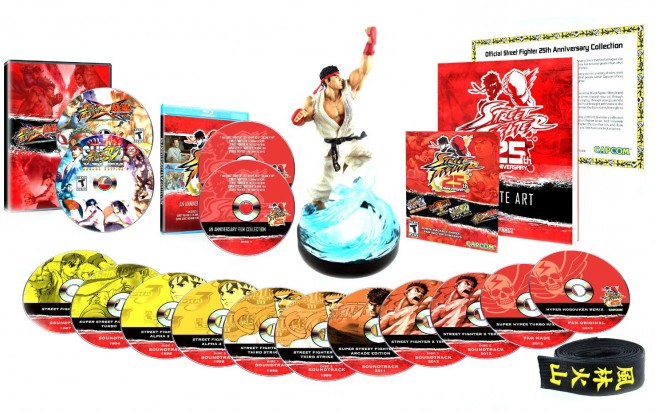 Roughly 25 years ago, I –like countless others around the world — first plunked down my hard-earned allowance in quarter form to throw Hadokens and Yoga Flame and trap other kids in the corner until they rage-quit and left the local comic shop, forever. In fact, I even got in my first fist-fight over a particularly brutal beatdown I delivered to some mouth-breathing ruffian. Those were the days. …

Street Fighter, along with the gaming industry, have both evolved quite a bit while also changing very little, in some ways both good and bad. This $150 Street Fighter 25th Anniversary Collector’s Set is mostly a celebration of old, with a healthy dose of the new (or recent) thrown in. However, it’s also missing some pretty vital entries in the Street Fighter franchise.

Below you’ll find a gallery with a full breakdown of the set’s components, and below that I have a rundown of the various disc-based and digital content in the package:

Two discs, one case. If you already own these games, this is a good excuse to gift a friend so that you actually have someone to play against online.

*Note that the costume sets are broken up into multiple packs, for a total of nine (9) redeemable codes, including the two XBLA games.

This is a very healthy collection of animated Street Fighter films and anime, but Capcom has conveniently chosen to rewrite their own history by leaving out the Street Fighter live-action film and The Legend of Chun-Li. I’m sure it has some cozy licensing excuse to hide behind, but this is just another example of how this set is just a partial slice of Street Fighter history. Still, you can never own enough copies of The Animated Movie.

Also note that the film content comes on two Blu-ray discs, meaning you’ll ironically need a PlayStation 3 to watch content from your Xbox 360 collector’s set. Unless you bought a regular Blu-ray player. But really, who does that?

Music lovers can rejoice at the 11-disc soundtrack collection. Many of the games noted as missing above are also not represented here, but it’s not too much of a loss considering Capcom’s been recycling the same tunes for decades.

Still, this is a beefy combo of nostalgia, and the fan-made discs are an awesome addition, as they take the iconic background music we all know and love in crazy new directions.

This incomplete package is more of a Street Fighter “Starter Pack,” best suited as a gift for nonenthusiasts. Any hardcore fans will likely already have a great deal (if not all) of the games and game content offered, making this bundle somewhat redundant. The lack of more than half of the Street Fighter game catalog is rather disappointing, especially considering they’re either already available on the PlayStation 3, or will be soon, in the case of Street Fighter vs. X-Men and Capcom vs. SNK (you know they’re getting ported eventually).

On the upside, if you want all the extra goodies but, like me, have taken a strong stance against Capcom’s shady DLC practices over the past couple of years, this package offers up a lot of games and downloadable content for a fraction of the price you would have to pay otherwise.