Turning traditional game branding on its head, Hasbro and Zynga are teaming up to launch popular Zynga social games as Hasbro-produced board games for U.S. retailers. 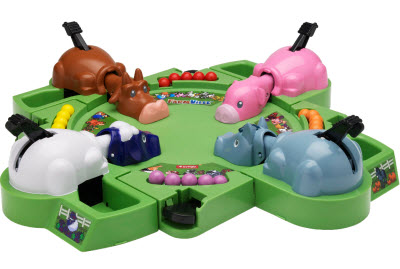 The four games will hit store shelves this month and include Words With Friends, FarmVille, CityVille, and Draw Something. Together, these games have been played by hundreds of millions of users on Facebook and mobile platforms. Zynga currently has 306 million monthly active users for its mobile and social network games.

Because these social online games have reached deep in the zeitgeist of mass culture, the companies have decided to take the digital game brands and introduce them to the real world of family board games. Usually, board games are adapted to become online games.

The Hungry Hungry Herd (pictured right) game draws inspiration from the characters of FarmVille. In that game, players try to gobble up the most apples. This game and the CityVille and Words With Friends titles include special digital values that help enhance a player’s online or mobile game play. Parents can redeem 50 Farm Cash digital currency to keep their farms going online. You can choose from among a Gobbling Horse, Munching Pig, Snacking Sheep, or Chomping Cow. You let loose marbles into the middle and try to eat at many as you can. The game will sell for $22.99 and is for players ages four and up.

In CityVille Monopoly (pictured left), players race to build their dream cities. You can buy locations such as the train station, the toy shop and the bakery. You can use stackable houses to build businesses, apartments and homes. And you can give and receive Mystery Gifts to improve the value of your neighborhood. It sells for $24.99 and is targeted at kids eight and up. It also gives players 85 City Cash to use in the online version of CityVille.

In Words With Friends, which closely resembles the Scrabble board game, players can play word combinations in the hope of scoring the most points. But there are probably more people playing Words With Friends on the planet than there are playing Scrabble. Players get access to a bundle of digital features, including Word-O-Meter, The Count, and Tile Pile to boost their scores in the mobile or online versions. You get letter tiles and arrange them in a rack.

As with the online version, the game gets more interesting if you can land a word in the Double Word or Triple Letter squares. The game has four tile racks and 104 tiles. The game is available at most major retailers this month for $19.99. It is targeted at ages 13 and up and can accommodate two to four players. It is also available at HasbroToyShop.com. 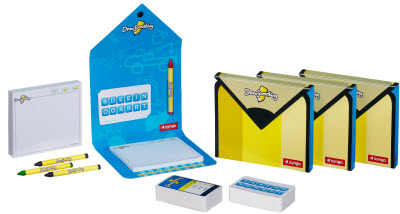 In Draw Something (pictured below right), a title that takes on Pictionary, players will be able to show off their artistic capabilities. You choose a card and pick one of three items to draw, ranging in difficulty from easy to hard. The more difficult the item you’ve chosen to draw, the more coins received if another player guesses correctly. The game will sell for $19.99 and is for kids eight and up.

“We are thrilled to be working with Zynga to give their millions of fans an exciting experience with the Zynga games they love,” said Eric Nyman, senior vice president and global brand leader of Hasbro Gaming in Pawtucket, R.I. “We love how gaming brings people together, especially during the holidays, and we can’t wait to offer friends and families even more great options to play.”

“We are proud to team up with Hasbro and excited for our players to experience their favorite Zynga games in a new way,” said Barry Cottle, executive vice president of corporate and business development at Zynga. “Our hope is to enhance relationships through play through our web and mobile social games and now, with the new Hasbro games, we can make those connections even stronger for our players.”