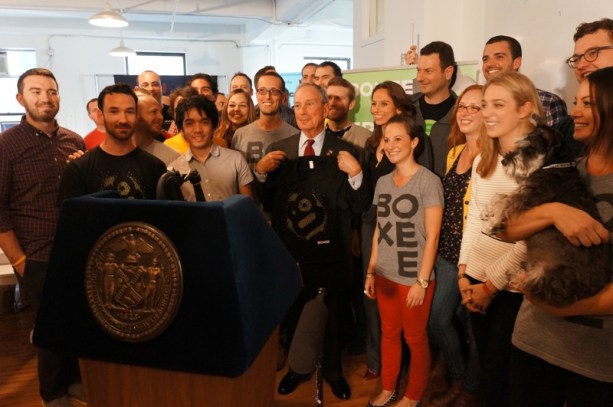 “Today the tech sector is bigger, more diverse, and more innovative than ever before,” Bloomberg said, and he pointed out that New York City is on track to create more jobs in any year since the tracking of job growth records began 50 years ago.

The mayor revealed that he went on a cab ride yesterday along with Square CEO Jack Dorsey to commemorate the company’s acquisition of NYC design firm 80/20 (which also marked Square’s official moved into the city). Bloomberg said he paid for the ride using Square’s credit card reader, which are in some cabs in the city. Even though the trip was only a few blocks, he noted that the cab driver said he was earning higher tips through Square’s service.

Google chairman Eric Schmidt, Boxee CEO Aver Ronen, and Paperless Post CEO Alexa Hirschfeld joined Bloomberg today, and all chimed in on why they believe NYC is a compelling spot for technological innovation.

Ronen, beaming from hosting such a high-profile event, said that he hopes the city can attract more Israeli innovators thanks to the city’s partnership with Israel’s Technion for Cornell’s upcoming tech campus.

“In order to believe in the future of America, you have to believe in innovation,” Schmidt said. He went on to say that innovation is particularly attracted to cities that have the right combination of elements: money, a reason for people to come to the city, and a committed leader.

When asked if he felt that the digital industry was shifting toward New York, Schmidt said: “If you look at the investment data, New York has been the fastest growing on a percentage basis. … I think that structure would be true for a while, and I think it’s good for Silicon Valley to have a competitor.”

Taking the well-placed opportunity to chime in, Bloomberg pointed out that many Silicon Valley entrepreneurs are moving up to San Francisco. But he added: “Why would they come here? We’re the intellectual capital of the country, and arguably the world … for those people who really want to be challenged mentally, this is where you want to be.”