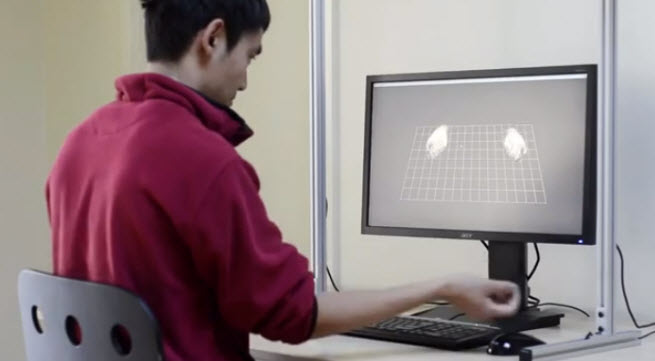 The Kinect system, which works with Microsoft’s Xbox 360 video game console and also the PC, can detect 3D movement in a room from a few feet away. But 3Gear has created technology that recognizes your finger movement, much as Softkinetic has done with its own gesture-recognition system.

With 3Gear, the mouse treats your hand as if it’s one big pointing finger. The touchscreen interaction is about sliding around pictures under glass, but 3Gear expects developers will use it for 3D applications rather than games. You could, for instance, grab things and turn them over or assemble them. It could be used in assembling 3D parts in computer-aided design or examine body parts in a medical imaging scan.

The imagery is right out of movies like the computer scenes in Minority Report or Iron Man. 3Gear believes mechanical engineers and 3D printing hobbyists will use it to make their work much easier. This tech firm is based in San Francisco and was founded this year. It has three employees.

Rivals include SoftKinetic, Leap Motion, and Omek Interactive. But 3Gear says its system is more comfortable and ergonomic. You don’t have to lift your hands very high to interact and your arms are supported comfortably by a desk. 3Gear says it developed new computer graphics algorithms for reconstructing the pose of the hand from 3D cameras like the one used in Kinect. The company also uses a database that lists possible hand poses and associates with them with how they would appear as data from the 3D cameras. At run-time, the program simply looks up the pose of the hand and displays it within milliseconds — a short time that makes the technology seem more responsive.