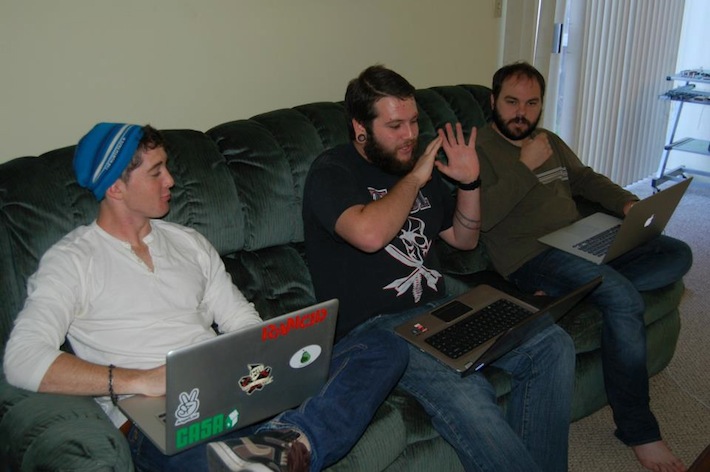 Video chatting company FreshTag is sick of having to invite you to things. Can’t you just anticipate what FreshTag wants and do it before it asks? Gosh, be a better user. That is, when it comes to video chats.

The company set up a way to video chat without usernames or friend-invites, though it may not be the most private way to meet face-to-face online.

“At the moment, it’s a pain in the ass to do something as simple as chat over live video,” said cofounder Prateek Gupta in an e-mail to VentureBeat. “Rather than connect people based on randomization of ‘likes’ as a few other services have done, we connect users based on a topic or hashtag they want to discuss right now.”

San Francisco-based FreshTag was born after 17 hours of coding at a hackathon in June this year. The company has four employees, two founders, and two programmers that met at the same hackathon.

Gupta asked the crowd at the DEMO Conference in Santa Clara, Calif., “So what do you call three white boys, and one Indian? A Bay Area startup.”

FreshTag works by going to freshtag.me and entering a hashtag to create a chat room. From there you must click “go live” and give permission to Flash to access your computer’s video camera. Then, friends can join by going to frestag.me/the hashtag you chose or by entering the hashtag on the homepage.

The team spent the last four months building the product and are turning their attention toward finding the right investors for their first round of funding.

“There are a couple different people going after this YouTube Hangout case,” said a Pete Sonsini partner at New Enterprise Associates at the DEMO Conference in Santa Clara, Calif., “They’ve got something that is really beautiful. I think the real challenge with these things is how to get real distribution.” 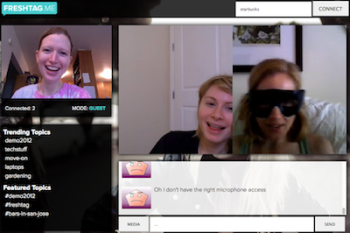 VentureBeat’s Jolie O’Dell, Chrissy Farr, and I all tried out the service (probably a little too early in the morning, check the screenshot right) to see just how it worked. We set up our video chat on the hashtag #Starbucks. First, the audio and video quality is great when it is two people, but like most video chat services, we had a huge echo-problem once the third person joined in. In terms of how the video and audio runs, FreshTag wants to dump Flash, saying the company “must not rely on third-party plugins.” Currently, the founders are trying out other web technologies and are “blown away by the video and audio quality.”

One of the bigger issues is if users assume they have any privacy on the site. Jolie was able to see and hear Chrissy and I talking without her presence in the chat ever being known. It has a counter for how many people are involved in the video chat, but that only counts if the participant has pressed “Go Live” to activate their camera.

But websites such as Airtime that bring together people who don’t necessarily know each other but have something in common are falling by the way-side. And while it’s definitely easy to pop in a hashtag and start up a chat, some prefer the security that comes with a username and invite system that Google+ Hangouts and Skype use.

FreshTag is one of more than 75 companies and 6 student “alpha” startups chosen by VentureBeat to launch at the DEMO Fall 2012 event taking place this week in Silicon Valley. After we make our selections, the chosen companies pay a fee to present. Our coverage of them remains objective.