So you want a mobile app, but you don’t know a lick of code. iBuildApp‘s online app creator makes it easy to create a wide variety of mobile apps for the code clueless, and today the company is also launching a marketplace for plugins on its platform.

“Just image for a second that you can build powerful mobile applications within just three minutes, without knowing the code, and it’s free for you,” said chief operating officer Artem Gassan at the DEMO Conference in Santa Clara, Calif.

Using iBuildApp’s web client, you can create native smartphone and tablet apps for iOS and Android, as well as HTML5-based mobile web apps. All you need to do is choose an app design, plug in elements like an RSS feed, social media feed, or photo album, and then upload your content. The company will also host your apps, and makes it easy for you to send updates as well.

“The platform as a service market has had a lot of adoption lately because it has this trend of building things faster, easier,” said Ross Fubini, partner at Kapor Capital at the DEMO Conference, “The question is, how good are the apps?”

iBuildApp’s solution isn’t exactly meant for huge companies or complex services — especially since your iOS apps aren’t available on Apple’s App Store. But for individuals and small businesses who want to connect with their clientele on mobile, it could be a good solution. 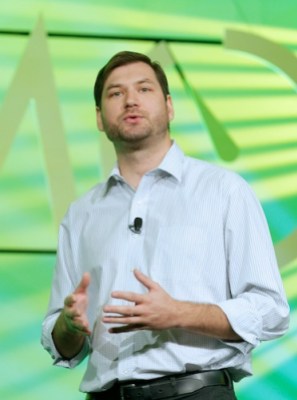 “Currently, if you are business owner or even an enterprise, you have to face a long way to develop app using internal Android and iPhone, [use] HTML5 developers, or have to hire an external dev agency,” said iBuildApp’s CEO Rafael Soultanov in an email to VentureBeat. “We can really speed up the process of developing and testing apps even for enterprises that have long [six month to 10] month research and development process.”

Soultanov says that the company has recently rebuilt its plugin architecture, allowing developers to create their own useful extensions for other iBuildApp customers to use. The company is today opening up a marketplace for the extensions, which will allow developers to make a few bucks from their creations and will also give another way to speed up their app development.

The company competes with the likes of PhoneGap and AppCelerator’s Titanium platform.

You can make apps for free on iBuildApp’s platform, if you don’t mind the company’s brand and ads within your app. Custom apps with only your branding start at $9.99 a month/$99 a year, which includes up to 200 downloads. At the high end, you can spend $79 a month/$799 a year for unlimited app downloads and added support.

The company claims that more than 11,000 apps have been downloaded from its platform by more than 180,000 app builders since its launch in 2010. Overall, iBuildApp’s platform has led to over 230,000 apps being built, and more than 60,000 of those were published.

Based in Foster City, Calif., iBuildApp has raised $375,000 in seed funding and is seeking a $3 million round now.

iBuildapp is one of 75 companies and 6 student “alpha” startups chosen by VentureBeat to launch at the DEMOFall 2012 event taking place this week in Silicon Valley. After we make our selections, the chosen companies pay a fee to present. Our coverage of them remains objective.