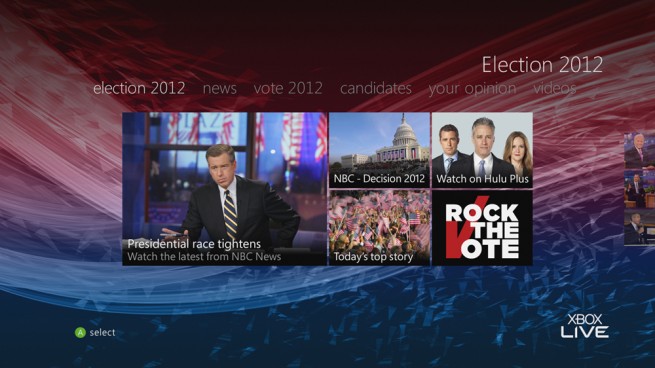 The polls are neck and neck, the political attack ads interrupt every rerun of the Gilmore Girls, and the presidential debates begin tomorrow.

We’ve obviously found ourselves in the darkest recesses of the 2012 election season, but don’t worry: Microsoft wants to help.

The multimedia giant wants all voters to hop onto the Election 2012 Hub, its specialized politics app, on Xbox Live tomorrow night to watch and interact with the first of four presidential debates. As the debate streams live, starting at 9:00 P.M. EDT via the Xbox 360’s Live Event Viewer app, users can weigh in on real-time poll questions.

Everyone can submit potential poll questions via the #XboxPoll Twitter hashtag.

Now, before you dismiss Xbox Live as a hangout exclusively for 12-year-olds, examine this handy infographic that Microsoft included to break down the Xbox Live swing voter: 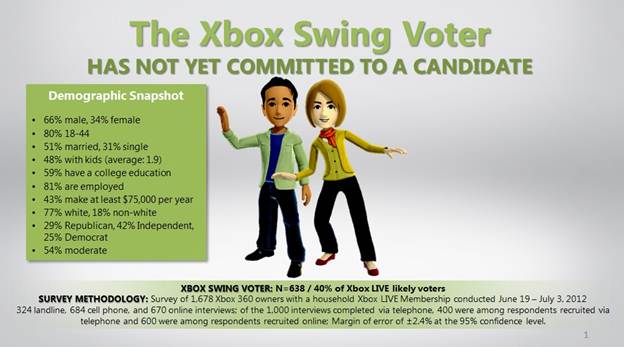 Following the first presidential debate tomorrow, three more debates are scheduled for later this month, one of those being a vice-presidential debate. To encourage civic participation, Microsoft will give a Halo 4 Warrior Armor avatar award to everyone who watches three out of the four debates. Seems like a pretty good deal.

To watch and interact with the debates on your Xbox 360, simply scroll to the Election 2012 Hub on your dashboard. It’s usually right on the home screen. Once in the hub, select the “Join the debate” tile and the Live Event Viewer app will automatically install.

Microsoft began its Xbox Live election coverage on August 23.  So far it’s focused on daily polls from YouGov and news programming from NBCNews.com.