Career mode continues to taint my dream of becoming a footballer
I, like many, have dreamed of scoring goals, making millions, and having to angrily shoo away paparazzi while getting into an Italian supercar. FIFA 13 takes that footballing fantasy and turns it into a grinding, tedious ordeal. The career mode follows a standard template. You create a player, put him on a team, and play through matches to earn skill upgrades. Sadly, the mode is full of annoying quirks that mostly spoil the fun. 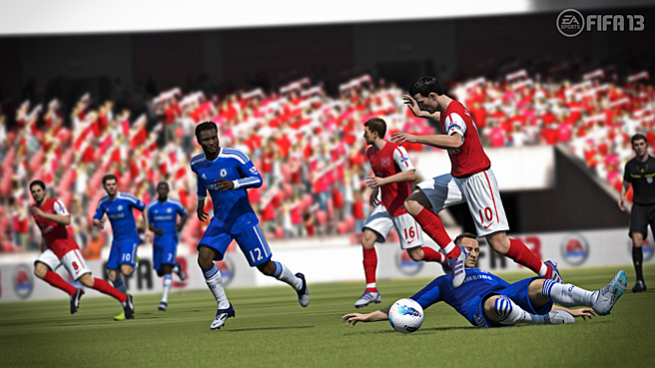 For instance, you’re evaluated on your match performances through a woefully imperfect rating system. Each great play is rewarded with barely noticeable positive bumps on a 10-point scale, while an errant pass can knock off an entire point or two. The only way to end a game with an eight or above (as an offensive player) is to find the net, make assists, or do both. This becomes even more challenging if you’re playing in a midfield role. These ratings factor into your player’s overall objectives, and they can help your soccer stud improve his abilities.

Even worse, during my career-mode playthrough, my Soccer for Dummies-reading coach insisted on playing me as a left winger instead of at my natural centralized-striker position. That same computer-controlled cretin decided to sub me out of games at halftime when I was usually the best player on the field.

This year, the mode includes international fixtures. While playing for club and country is an exciting notion, it’s just not worth all the work and aggravation.

You can play as “Brazil” but not the true Brazilian national team
FIFA 13’s club and national team selection is large enough to fill a hefty football almanac, but unfortunately, many of the sides lack full licenses. The game’s version of Brazil sports generic uniforms, not the iconic canary-yellow shirts complete with Brazilian Soccer Confederation badge. No, these threads look like something your parents would get you at the local department store. The only thing missing is “soccer” written across the chest in block letters.

And this isn’t even a FIFA 13 issue. Brazil has lacked a license for the last few entries in the franchise. Countries like Cameroon, Russia, South Africa, and Uruguay have also received the nonproprietary treatment in 13. Even certain club teams have suffered the same fate. My beloved Vasco da Gama, a true giant of the Brazilian league, is now represented as “V. R de Janeiro,” including an uninspired, clip-art-like crest.

For a game that takes pride from its nearly countless licenses, FIFA 13 has a few egregious gaps within its roster of rosters.

New commentators … are … not so … lifelike
Few sports series have the level of broadcast-quality commentary that FIFA boasts. British duo Martin Tyler and Alan Smith continue to do a fantastic job as the main play-by-play team for the title. But this year, they’re joined by an on-field reporter who sounds as natural as an ’80s telephone answering machine. The reporter’s sound bites are stilted and roughly pieced together, taking some of the magic away from the still top-notch narration. 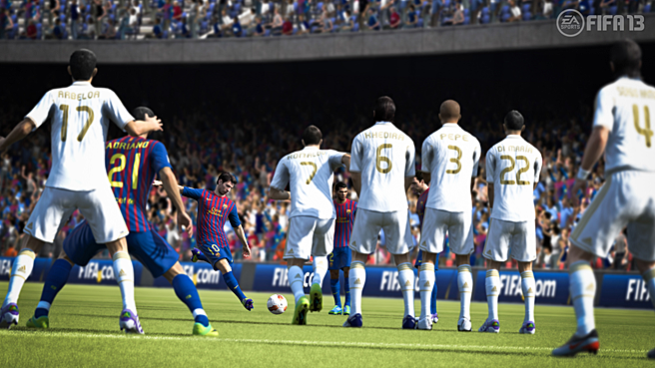 And the horrific radio announcer in career mode is even worse. While setting my lineups, I had to endure multiple … staccato … updates … informing me … about … the latest … results.

FIFA 13 is irritating and painful yet wonderful and nuanced, just like the sport it so painstakingly emulates. The mercurial imperfections make soccer one of the greatest things we have in this world. And, once again, EA Sports has managed to capture some of that wonder on a disc.

In short, yeah, FIFA 13 is worth the money. It’ll slip on nicely, just like that dependable kit from last year.

FIFA 13 released on Sept. 25, 2012 for the PlayStation 3, Xbox 360, and PC, with a Wii U version coming on November 18. The publisher provided GamesBeat with a PlayStation 3 copy of the game for the purpose of this review.