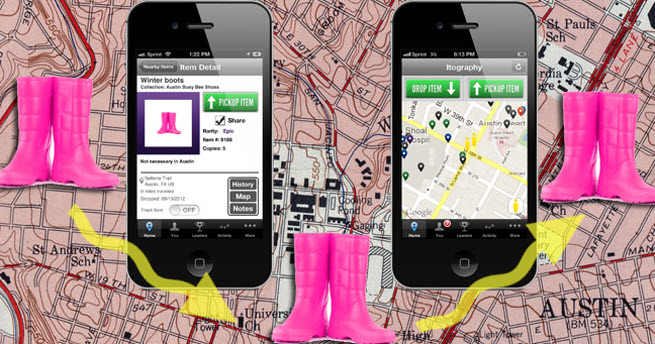 Mobile ads suck. Itography wants to change them into something better that both brands and consumers will love.

The Austin, Texas-based startup, appearing at the DEMO conference today, is creating a game where mobile users can pick up virtual branded items such as shoes at real-world locations using their smartphones. Then they can move somewhere and put the virtual items down. In doing so, they can win prizes from the footwear brand. They can also win rewards for sharing the items with their friends. The game gets players directly involved with a brand. Players can, for instance, earn rewards for picking up a whole collection of shoes and compete with friends on leaderboards. As the shoes are picked up and dropped, the movement shows up on a map, and each pair of virtual shoes develops a history that tells a unique story. 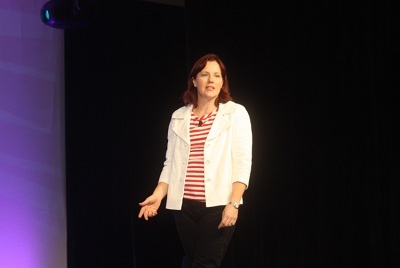 The name comes from putting together the words “items” and “cartography.”And the company thinks this alternative is a lot better than a typical banner ad at the top of a mobile phone screen. Smartphone users don’t like how those ads clutter up the screen, and brands don’t  like spending money on mobile ad campaigns that are largely ignored. Games, on the other hand, are fun and engaging. If Itography catches on, it could help diversify revenues and make mobile marketing more effective by emphasizing quality interactions.

Melissa Conley Tyree (pictured), co-founder, calls the title a “virtual collection game” for casual gamers. In that respect, it’s not so different from Ultimate Collector, a social game created by game legend Richard Garriott, who runs the Austin-based social and mobile game startup Portalarium. Itography will create the game for Apple iOS (iPhone, iPod Touch, and iPad) and Android devices. The game taps into the fundamental desire to collect things and share them. It includes mechanics to reward behaviors that give the game longevity, such as passing things along to friends.

On stage, Conley Tyree showed examples of how you could pick up a shoe and then move it around, using a fictional shoe company. She zoomed in on a red canvas shoe that traveled 1,500 miles from Austin to Santa Clara, Calif. She dropped the shoes off. Conley Tyree said some shoes have traveled more than 2 million miles and have picked up a long history of possession and drop offs. Items that have a red background are unique in the game.  Conley Tyree said that if you find your 20th pair of shoes, you might be rewarded with a free pair of real shoes.

She noted you have to be within 500 meters of a virtual item. Once you drop an item or pick one up, you can share that fact on Foursquare, Facebook or Twitter.

One of the DEMO Sage experts, Tracey Isacke, director of investments and business development at Telefonica Digital, said on a panel after the presentation that she found the six-minute presentation a little confusing and could use a more thorough explanation. Josh Elman, a principal at Greylock Partners, said he liked the app as it resembled the geo-caching apps of years past, in a more attractive format.

Itography is looking for its first sets of partners to offer branded collections. It may modify the platform based on feedback from brands. The top priority is developing a tighter integration with Facebook using the Open Graph applications programming interface (API) for location-tagging in Facebook. At some point, the company can create more viral activity by surfacing more of its content on the web, such as displaying the “most shared items,” “most active venues,” “total distance traveled by all items,” and “additional map overlays.”

Founded in September, 2011, the company has three employees and has been bootstrapped to date. Itography has received help from Tech Ranch Austin and is a DEMO Scholarship Partner Program recipient. Co-founders include Kyle Grundman and Jeremy Tyree.

Itography is one of 75 companies and 6 student “alpha” startups chosen by VentureBeat to launch at the DEMO Fall 2012 event taking place this week in Silicon Valley. After we make our selections, the chosen companies pay a fee to present. Our coverage of them remains objective.