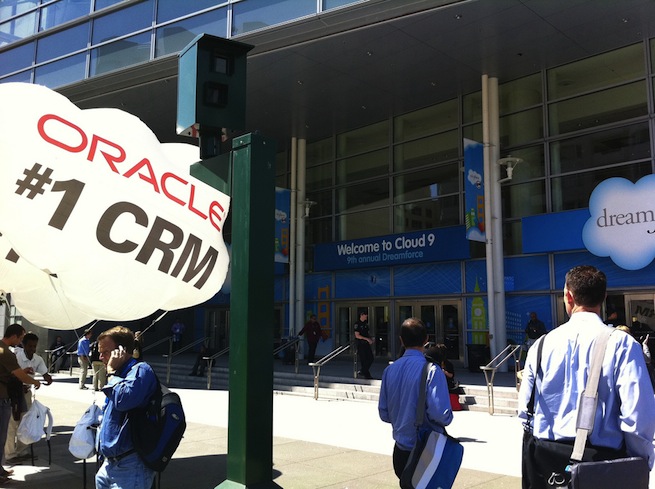 SANTA CLARA, Calif. — Salesforce may have some huge competitors like Netsuite and Oracle, but it’s not the big dogs that keep the customer-relationship manger on its toes.

“We spend more time thinking about a Dropbox than we do some of our competitors because that’s where the innovation is,” said George Hu, the chief operating officer of Salesforce at the DEMO Conference.

Hu may have been skirting around the question of “who are your competitors,” but the reality is, innovation from young startups really is something that keeps executives up at night.

A number of startups are directly taking on Salesforce, like Nimble, which is going after “social customer relationship management,” or creating a network around your database of customers and partners.

But Salesforce, which first launched at the DEMO Conference, is already expecting to bring in $3 billion in revenue this year and hopes to reach $10 billion soon. The company’s platform division, force.com, is its fastest-growing product and accounts for half of the company’s API calls. Its recent Dreamforce conference in San Francisco, Hu said, had 90,000 in registered attendance  — that’s a huge number of people. Numbers like that are exactly what challenges Hu.

“The pace keeps me up at night,” he said. “Things are moving incredibly fast at Salesforce right now. The pace never ends.”