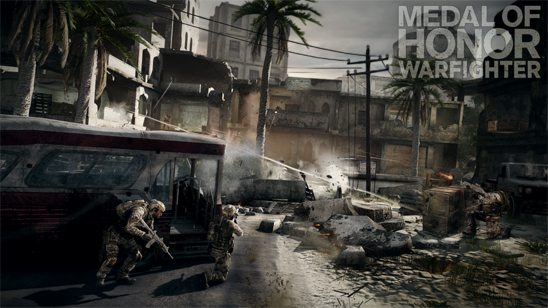 The 2010 reboot of Medal of Honor certainly had its share of controversy. Billed as a gritty look at the lives of so-called Tier 1 Operators — the elite of the elite in the American special forces — it caught flak from the real-world military for putting players in the roles of the terrorists. The terrorists are gone from the multiplayer, but for better or worse, the single-player campaign is intent as ever on ripping its story straight from the headlines.

In real-world hot spots in the Middle East and Somalia, the Tier 1 Operators encounter both pirates and local terrorists in their hunt for PETN — the same stuff used by “Shoe Bomber” Richard Reid. It’s an approach meant to set the series apart from the more fanciful stories of Call of Duty, with their secret numbers and Russian conspiracies. The story also goes out of its way to add depth to its eclectic cast of super soldiers. The main character, a man code-named Preacher, is shown dealing with both the fallout of the fighting and a broken family.

Single-player producer Luke Thai talks at some length about the need to get a “soldier’s perspective.” He feels that it’s a sense of personal engagement with the soldiers that helps set the series apart. With Call of Duty having quite a bit in common with the television show 24, Thai identified shows and movies that are similar to Medal of Honor, and he isn’t shy about employing a bit of hyperbole: “It is a little bit Hurt Locker meets Saving Private Ryan.” 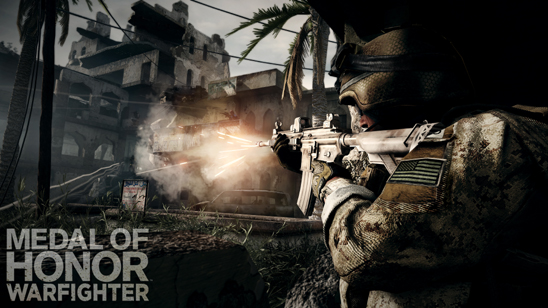 Neither film, of course, needs any introduction. Thai laughs off suggestions that Medal of Honor’s story is on the same level as these Best Picture nominees, but he feels fans have a genuine connection to the franchise and to the “soldiers who have sacrificed so much for their country.” It says as much as anything about how developer Danger Close wants its franchise to be viewed by general audiences.

Such sentiments, however, can’t help but bring Medal of Honor into sticky territory. Unlike Call of Duty, which defaults to classic Red Dawn-like scenarios that are rarely meant to be taken serious (save for the still-chilling “No Russian”), Medal of Honor rips its missions from the headlines. The Bin Laden raid took place after development had already started, for example, but given a chance, one gets the feeling that Danger Close would have tried to work it in.

What’s troubling about Medal of Honor: Warfighter is how nonchalant it sometimes seems about the issue of war. The recently-released Spec Ops: The Line, for example, has been lauded for its deconstruction of the modern military shooter and its uncomfortable depiction of war as hell that blurs the line between friend and foe. Medal of Honor’s outlook is a bit more black and white.

“It’s important to call out the fact that the conflicts that are occurring are versus forces that are considered bad guys in the world,” says Thai. “So it’s not really about race or nationality. It’s really about fighting the bad forces in those particular regions that we depict in the single-player. And approached that way, it’s not really that sensitive.”

That outlook is reinforced with missions that feel arcade-like at times. Danger Close showed two levels at their recent event: a conventional stage that culminates with a sniper battle on the rooftops and a driving chase. With a few exceptions — moments that Thai refers to as “nuggets of realism,” such as working together to break down a door — it feels much like any other military shooter. The action takes place around discrete set-pieces and involves mowing down dozens upon dozens of enemies — not exactly the stuff of a film like Hurt Locker.

Never is that more apparent than the car chase section, which the Need for Speed: The Run team at EA Black Box developed in part. It’s actually the strongest part of the demo, featuring challenges like navigating narrow alleyways, a crowded marketplace, and a surprise traffic jam. When you finally catch your prey with a well-timed sideswipe, the resulting collision is straight out of Burnout. 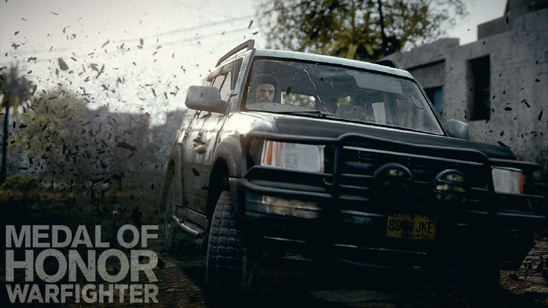 “What ended up working really well is that, if we’re going to do a driving level, we’d better do it right,” says Thai. “That’s what’s going to set our driving level apart from any other. And that’s where the idea came into play to interface with and collaborate with some of the Need for Speed folks and get their expertise to really make that driving experience super compelling.”

It’s perfect for Medal of Honor, which may be part of the problem. With a few exceptions, Need for Speed has generally been content to leave the sim aspects to the competition in face of a more arcade-like experience. That feeling is certainly present in Warfighter. It feels good, but it’s definitely at odds with the franchise’s attempts to present itself as a realistic military shooter. It seems that Medal of Honor wants to have it both ways: gritty realism and arcade shooting.

Admittedly, walking the line between realism and fun isn’t easy, especially when it comes to shooters. Even Spec Ops is ultimately pretty arcade-like in its approach to shooting. But that said, Spec Ops is pretty fanciful itself in its depiction of a Dubai buried to its waist in a vicious sandstorm. Medal of Honor wants you to believe that the scenarios it’s presenting could be playing out as we speak.

In that, it displays a certain lack of self-awareness. Danger Closes’ attempt to make its soldiers more than action figures is laudable, but in the end, the gameplay has to match the tone of the story. Based on what has been shown thus far, the gulf between the two in Medal of Honor is as wide as ever.