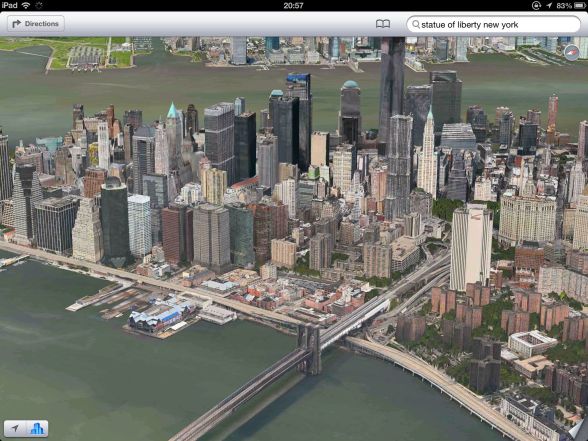 Slowly but surely, Apple is improving the iOS 6 Maps experience.

iPhone owners have begun noticing significant changes in Apple’s Maps app, which has added more 3D data. Two big examples are the newly 3D-ified Stature of Liberty and an improved Brooklyn Bridge, both of which were previously flat images. Similar improvements are in the map data for much Brooklyn, which is also available in 3D.

The improvements come a week after Apple CEO Tim Cook apologized for the initially lackluster Maps experience. “We are extremely sorry for the frustration this has caused our customers and we are doing everything we can to make Maps better,” Cook said.

Fortunately for iOS users, the improvements to Maps are coming sooner rather than later.

Apple’s latest fixes may be small in scale, but they’ll still go a long way toward proving to iPhone owners that Apple is serious about improving its Maps data.

But Apple still has a lot of work to do. Adding more 3D data may be a big deal, but the more irksome problems have been the ones related to incorrect addresses and, for city dwellers, the lack of public transit directions.