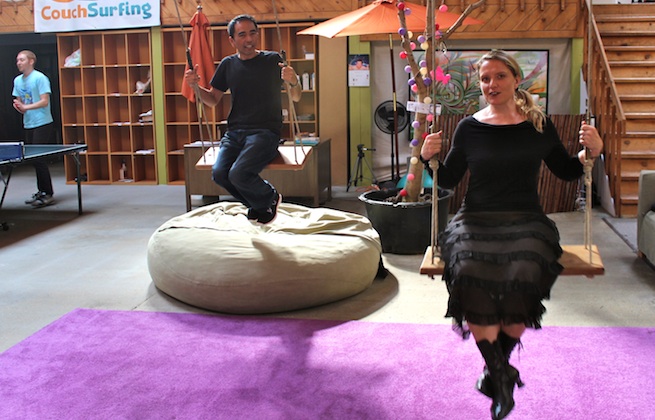 In some ways, the CouchSurfing headquarters in San Francisco is exactly what you’d expect. It’s got an engineer rocking a “don’t shave” T-shirt, a twentysomething community manager who likes to put his feet up, and a CEO who plays a round of table tennis to take the edge off a Friday afternoon.

You’ll also find the signs of a cash-flush startup: the in-house chef, the fully stocked fridge, and the enviable perks. Since the traveler network and website transitioned into a B Corp., it has attracted some heavy-duty interest from investors. As we reported last month, the company that connects travelers with strangers willing to spare their couch pulled in $15 million in a General Catalyst-led funding round.

To compete with tech companies like Google and Facebook, CouchSurfing is one of many that offers great benefits and perks to attract talent and ensure its employees stick around. During a visit to CouchSurfing’s office in San Francisco’s Design District (just west of the Mission Bay neighborhood), I got a feel for the vibe, and new chief executive Tony Espinoza gave me a sense for what it’s really like to work at his company.

UPDATE 10/5/2012: We have revised this article to more accurately define the company’s vacation policies.