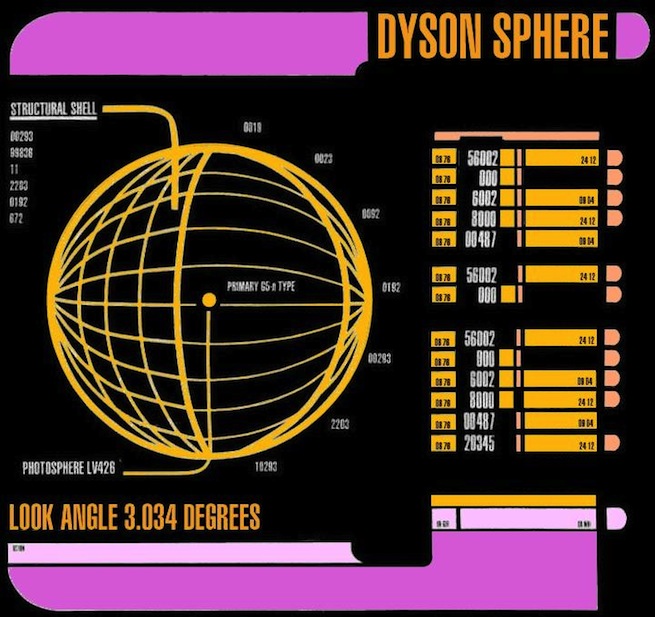 If NASA’s recent efforts to build a warp drive engine wasn’t enough to convince you that Star Trek will eventually mirror our own reality, then perhaps the latest research project from Penn State’s Astrophysics department will.

A team of Penn State researchers were recently awarded a sizable grant to search the universe for intelligently created spheres large enough to fit a planetary system inside — and to do so without ever setting foot on a galaxy-class Federation spaceship like the Enterprise-D.

The enormous objects are officially called Dyson Spheres, named after a 1960 theory by physicist Freeman Dyson about looking for extraterrestrial life. And as the theory goes, a Dyson Sphere is a dark object roughly the size of Earth’s orbit that is constructed around the entirety of a star. The object would also harness the star’s energy for the purpose of sustaining lifeforms inside the sphere almost indefinitely.

Dyson himself thought the theory was ridiculous, in part due to the insane amount of raw materials necessary to build such a mega-device, which would also require ultra-advanced technology capable of maintaining the correct temperature to support life. Even in the fictional Star Trek universe, record of a Dyson Sphere’s existence was only discovered once (in The Next Generation episode Relics).

But that’s not stopping assistant professor Jason Wright of Penn State’s Department of Astronomy & Astrophysics and his team of researchers from looking. Using NASA’s Wide-field Infrared Survey Explorer (WISE) satellite, the team will conduct searches based on Dyson’s theory that such structures would be detectable by giving off the same amount of infrared radiation as the star contained inside of it.

Wright told The Atlantic that such a sphere probably wouldn’t be a solid shell (such as the one from the Trek episode), but rather a collection or swarm of devices banded together.

The Penn State team’s grant was funded by the John Templeton Foundation’s New Frontiers program, which is “intended to foster research that, because of its non-mainstream nature or breadth of questions asked, would not usually be funded by conventional funding sources.” Academic researchers were asked to submit grant proposals that answered big questions, such as “Are we alone in the universe? Or, are there other life and intelligence beyond the solar system?”

If Wright and his team are able to find evidence of an actual Dyson Sphere, I’d say it’s safe to assume we’re most definitely not the only ones in the universe.