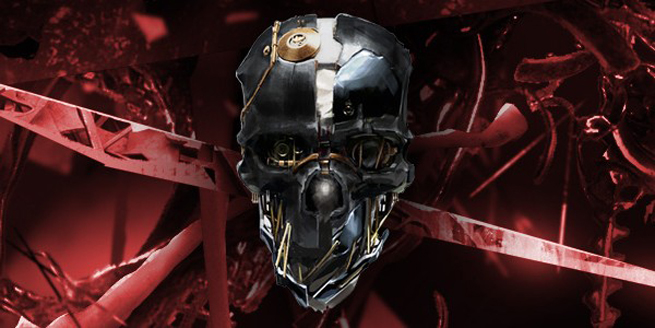 It’s rare to see something put the “punk” in “steampunk” as thoroughly as Dishonored does. Forget romanticism … the game’s fictional Empire of the Isles feels like it’s dangling over a cliff. Its high art and technological wonders both stem from the same delusional madman. A rat-borne plague has decimated the crumbling capital city of Dunwall. Corruption at every level is a given. When the Empress Jessamine Kaldwin reaches out to foreign powers for help, her own top advisers finish her off in a swift, bloody coup d’état.

And you? You’re Corvo Attano, the suddenly unemployed Lord Protector framed for her murder by its conspirators. Clearly, that’s not acceptable.

Luckily, loyalists engineer Corvo’s escape and a mysterious, omnipotent being known as the Outsider — i.e. Satan, according to the local religion — grants him astounding supernatural powers with which to rescue the kidnapped Emily Kaldwin, young heiress to the throne, and to dispatch the traitors who stole her crown. How you do it is entirely your choice.

That’s where Dishonored (available October 9 on Xbox 360, PlayStation 3, and PC) shines brightest, proudly reviving the first-person stealth genre and giving it a nicely twisted edge … even if a few flat notes keep it from true greatness. 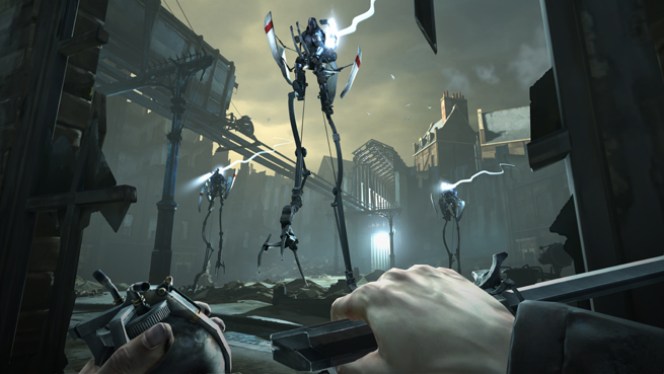 It takes a Thief: The Dark Project
Take the benchmark stealth gameplay from the Thief series, add the two-pronged weapon/power combo from atmospheric shooter BioShock, shake in a dash of Hitman’s silent assassination, and set it in 19th century Eastern Europe by way of Nicola Tesla. That’s Dishonored. But developer Arkane Studios didn’t just pick stellar influences (and wisely hire Harvey Smith, Thief’s lead designer, as a creative director). They mixed those elements into a seriously potent dish where every weapon, device, ability, and play style complements the others.

Well, eventually. Maybe it’s just been a while, but Dishonored’s brand of first-person sneaking takes getting used to. Keep Corvo’s body out of view, and you’re hidden regardless of any line-of-sight issues. Expect to lean out from cover a lot when you’re not looking straight through it with your x-ray Dark Vision. Distance and light factor in, too, but I’m pleased to report you’re never fully invisible. Pistol-packing officers and Overseer zealots always see you coming much sooner than their more careless subordinates, and Tallboys — heavily armed and armored sentries on robotic stilts — don’t miss a thing.

Once you dial into those nuances, Dishonored falls into place. Purchase and upgrade a few powers via collectable runes, and you can avoid or dismantle threats with near impunity. I frequently used Blink, a super-dash ability, to instantly zip up to unsuspecting enemies and kill/disable them before they even knew it.

Fortunately, Dishonored features some of the most careful balancing I’ve seen lately, making you feel like a total badass without ever breaking the game. Block-and-slash swordplay makes up the bulk of close combat — pleasantly tactile even if enemies occasionally rake you from 10 feet away — while everything else (gadgets, ranged weapons, supernatural abilities) maps to Corvo’s left hand. You can only equip one at a time. Resource drains keep the really dark magic in check, but even better, calling up the power-selection wheel doesn’t pause the game. If you don’t manage your hotkeys accordingly, the City Watch will chop you like month-old lettuce while you’re screwing around equipping your deployable rat swarm. And believe me, guards love to sound the alarm, call in reinforcements, and take you apart en masse.

So just like Thief, stepping lightly, staying out of sight, and planning your moves are the best strategies. Pick a fight on impulse, and you’re likely a goner. Not that you have to pick a fight at all, because …. 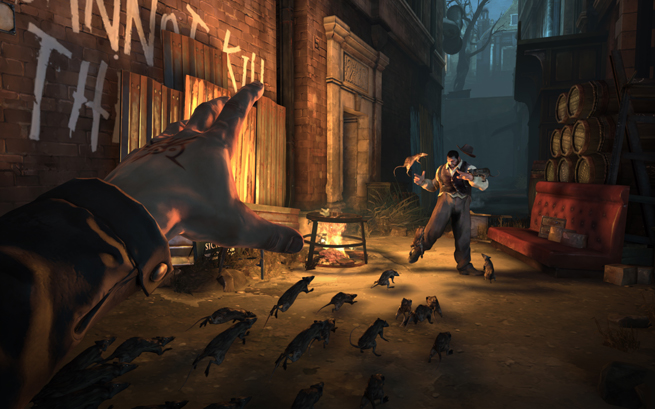 The gameplay options are astounding
While trapped on the wrong side of an electrified barrier, a quick glance around gave me a wealth of choices. Possess a nearby rat and scamper through a grate to the other side. Take control of a human soldier and walk right on through unharmed. Cut down the squad watching the barrier’s power source and steal the battery. Or do it when the guards weren’t looking.

Dishonored plays exactly the way you want to play it. Sneaky. Violent. Merciful. Mischievous. Malevolent. Expansive levels give you options a’plenty, and every problem comes with at least three or four solutions … or more, depending on which powers you’ve unlocked. Your supernatural arsenal tends to skew toward distraction, evasion, and infiltration, but you’ll find offensive uses for them as well. Why not freeze time, snap a few crossbow bolts into a few faces, attach a spring-razor mine to another enemy, then wind-blast him into a crowd of soldiers so they’re all shredded when time speeds up again? Yep, you can do that.

You can also finish the game without killing anyone, not even the targets your loyalist allies want eliminated, though the fates you arrange for your victims are arguably crueler than a swift blade to the chest. Or, like me, you can go around booby-trapping security devices to vaporize soldiers instead of Corvo, then stepping out into view so they unwittingly run straight into the kill zone. I have to say, the survivors wise up pretty fast.

So skulk around in sneak mode, take to the rooftops, find secret paths and hidden rooms, or simply assassinate everyone you meet and feed the bodies to the rodent hordes infesting the city. Any way you roll, Dishonored’s good with your decisions.

World building at the end of the world
The proud, decaying city of Dunwall might just be the most fully realized fantasy-game world since Rapture, BioShock’s underwater dystopia. Cool period flourishes blend seamlessly into postindustrial bleakness. You get a very real sense that a golden age recently gave way to the elements, to apathy, to plague, to unscrupulous science and black magic skulking in dark alleys. Dishonored’s visuals sometime look a bit too flat, and more than a few animations clip in reliably cheap ways (especially the ever-present rats), but the art direction wins out.

Arkane squeezes a lot of variety out of its setting, too. In addition to several fortresses, Corvo visits rotting slums run by warring gangs, attends a high-society costume ball in a spectacular mansion (the only mission where he can walk around freely without the City Watch pouncing), and travels into quarantine zones where Weapers — mindlessly hostile plague victims — roam the streets. Because, hey, what’s a video game without zombies nowadays?

You’ll find all the lore-hound favorites (notes, books, and audio logs) to fill out Dunwall and its whale-based economy. But Dishonored’s secret weapon is the Heart, a bio-mechanical organ/divining rod. When it’s not pointing you straight to every upgrade rune and stat-boosting Bone Charm, the Heart provides great insight into the world around you. Point it at people and it tells you their past and their future. Rarely does it say anything cheerful; “Unless he dies tonight, he will kill twice more before taking his own life” captures the essence of the Heart’s commentary pretty well. It’s even more instructive when you use it on your loyalist allies.

The Heart is easily my favorite character in the entire game. And that’s where we start getting into some of Dishonored’s bigger flaws.