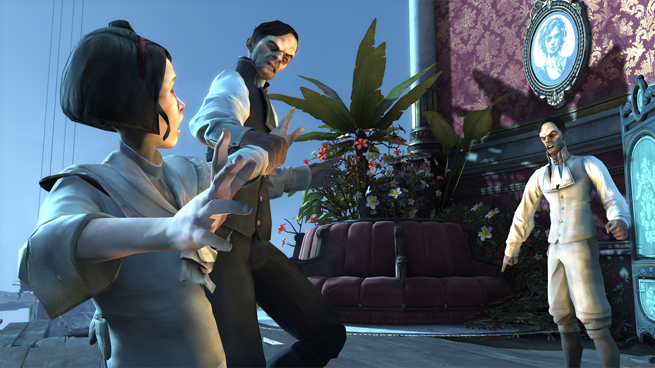 The marketing tells a better story than the game does
Silent protagonists have an important place in video games. Dishonored isn’t that place. When you push a story charged with highly personal motives like revenge, it helps if someone actually feels that bloodthirsty rage. I don’t, and neither does blank-slate Corvo, no matter how many times other characters insist he does. Considering how they also tell Corvo how awesome he is every chance they get, he doesn’t seem particularly dishonored either, despite both his rather glaring failure to save the Empress and the game’s very title.

But then, you’ll find plot holes just about everywhere you look, and no points for guessing the late-game twist; it’s telegraphed early and often. The Outsider exists mainly as an empty contrivance to give you superpowers and make snarky observations to the point where you’ll eagerly wait for your chance to take a shot at him (spoiler: it never comes). The Empress’ mysterious killers have powers similar to Corvo’s, but they show up as complete question marks and vanish with few explanations given. With few exceptions, using the Heart reveals the rich inner lives of soldiers, politicians, nannies, boatmen, servants, scientists, witches, and criminals far more than anything those people say or do.

None of this hurts gameplay, of course, but it’s still a major disconnect from what’s going on around you. In fact, Corvo seems more interested in saving young Emily Kaldwin from the power struggles of old white men than he is in destroying those men’s lives. We get interesting hints as to why, and then the plot drops the subject. Too bad, because nailing the story aspect might’ve made Dishonored a home run.

Limited gameplay options
Dishonored plays out across nine levels in seven environments (some featuring multiple maps), including the Hound Pits Pub, the loyalist hideout and game hub where Corvo hangs out between assassinations. I’m not entirely sure why this game needs a hub, but it’s got one. And while you can go anywhere and do anything in those open environments, you won’t find all that much to do.

Outside of patrols and occasional Weepers, Dunwall’s sparsely populated due to the plague. You might find abandoned or boarded-up apartments with a treasure-trove of goodies inside, but forget scooping up miniquests, Grand Theft Auto/Assassin’s Creed-style. Each level features one beefy main mission and one side mission, tops. More often, Dishonored relies on you to hunt for upgrades, or it hands you one quick, optional task to accomplish (save a friend’s cousin from being poisoned, kill your former torturer, and so on) since you’ve already snuck into the general vicinity anyway. More exploration won’t turn up any extras. Dishonored clearly signposts all of its content.

And no, not every level is a winner. You’ll find a long, uneven clunker right toward the end, and the short wrap-up level after it almost comes across as an apology.

That said, I’m already rerunning a few other levels to try different things, and exploring those possibilities makes up a lot of the stealth genre’s entertainment value. But without an exhaustive approach like that, the replayability is low, low, low. Sans multiplayer, a co-op mode, or even a “new-game plus” feature to carry your hard-won upgrades over to a fresh playthrough, a competent person should blow through Dishonored in one dedicated weekend. And that’s it. 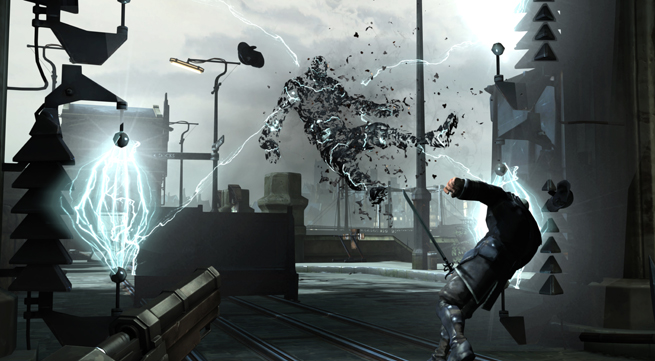 The payoffs don’t pay well
I dealt with the final target in one shot. Not even a headshot. Tagged him in the shoulder, I believe. Bit of a letdown, that.

But for a game that emphasizes choice above all else, it’s pretty light on consequences. Dishonored even warns you up front that a nonviolent approach offers more long-term benefits while bathing in the blood of your enemies changes how people treat you, adds more Weepers down the road, and generally steers Dunwall toward the end times. To be sure, you can earn a fairly apocalyptic final cut-scene, but the game’s very structure doesn’t allow it to make good on its threats more than once or twice. Other decisions don’t carry much impact, either. Asked to choose between two feuding allies boils down to whether you get more power upgrades or more weapon upgrades. Not exactly a dramatic gut-punch.

I actually like how forgiving the system is. In the interest of science, I merrily slaughtered my way through a few levels, slipped through others undetected, and played a mix (fighting only when discovered) the rest of the way. That approach still netted me a low-chaos score and the “best” ending. But even though I feel my soul is clean, I get the nagging sense I should’ve paid a heavier toll for my outrages. C’mon, “low chaos?” I just reduced half the constabulary to ashes and decapitated a horde of supernatural assassins! What’s it gonna take? 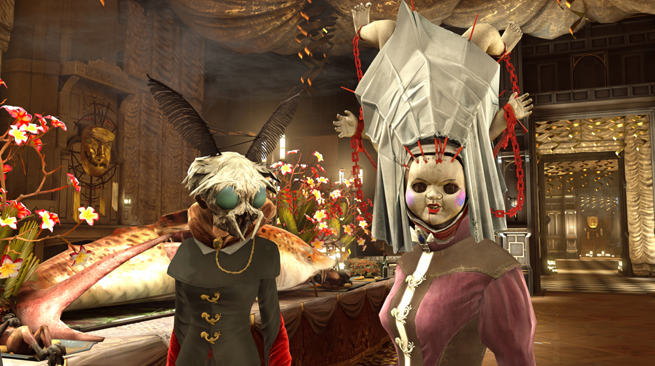 Dishonored releases October 9, 2012 for the PlayStation 3, Xbox 360, and PC. The publisher provided GamesBeat with a PlayStation 3 copy of the game for the purpose of this review.