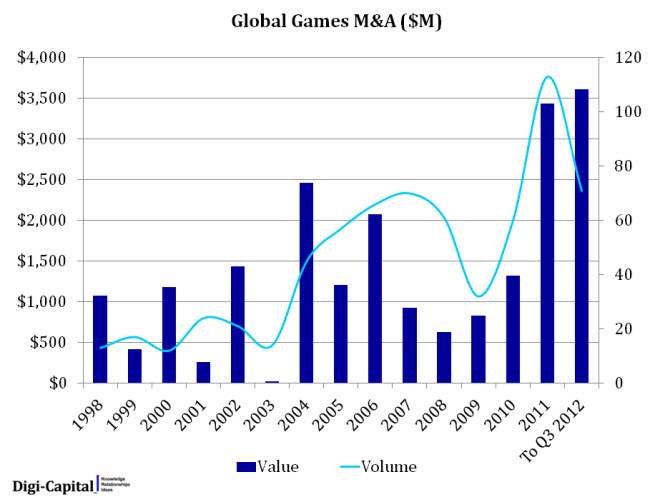 Game acquisitions reached an all-time high in the first three quarters of the year as Asian game companies swooped in on bargains in the U.S. and Europe, according to game investment bank Digi-Capital. At this rate, by the end of the year, game industry transactions could total more than $4.76 billion. 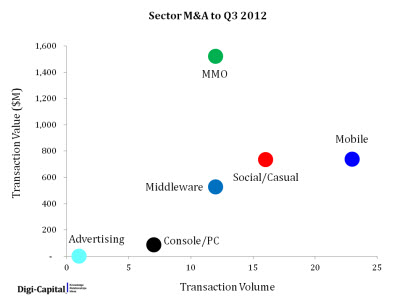 The game industry’s merger and acquisition (M&A) pace is beating last year’s record, with the value of game deals already at 105 percent of the transaction value for all of 2011. The current run-rate of game acquisitions is 40 percent higher in 2012 compared to 2011, said Tim Merel, the managing director at Digi-Capital.

Six of the top 10 largest merger and acquisition transactions were made by Chinese, Japanese, and South Korean acquirers. The number of mobile deals now exceeds all other categories, but investments in massively multiplayer online games generated more value year-to-date through the end of the third quarter.

The Zynga initial public offering was the high-water mark for social games investment. Venture capitalists have now moved sharply away from that sector into mobile game investments. Yet despite Zynga’s weak stock price, game companies in some sectors and geographies are trading at 12-month highs. Strategic pivots into social, mobile, online, and new geographies are becoming more common.

The run-rate for deal value is 40 percent higher but 16 percent lower by volume than 2011 because of fewer and larger M&A deals. Besides MMOs and mobile, the other categories for deals include social/casual, middleware, console PC, and advertising. Digi-Capital expects the trend of popular mobile and MMO deals to continue through the end of the year.

“Our largest Chinese, Japanese, and South Korean clients are particularly focused on M&A and investment in mobile-social, free-to-play MMO and middleware to leverage their strengths both domestically and internationally,” said Merel. “Our large U.S. and European clients are fishing in a similar waters but bring different strengths to the table. For the strongest independents that we work with, the accelerating M&A market is prompting some to consider their strategic options.”