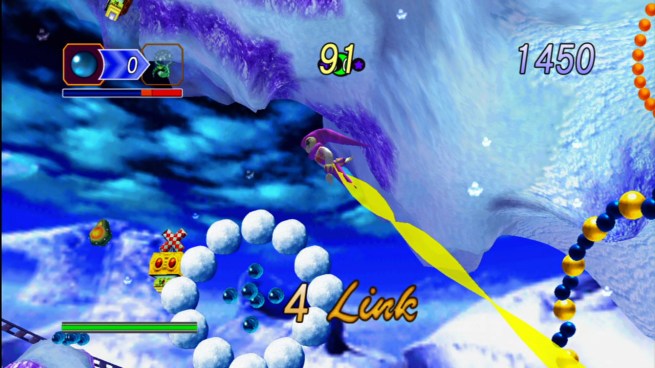 Nostalgia for gaming’s “golden days” seems to be the driving force behind many rereleases with companies like Sega taking back-catalog games, cleaning them up to match the graphical power of more modern hardware, and stoking the fires inside gamers who played the originals. While I never played Nights into Dreams on the original Sega Saturn console, I do know that many times, a nostalgic filter can be a rosy one, covering over any awkward blemishes that might only show up with closer scrutiny.

This new HD version of Nights into Dreams brings contemporary graphical performance to an updated port of the original title, which came out in 1996. You can download Nights into Dreams HD for the Xbox 360 or the PlayStation 3 and relive the experience with upgraded graphics, a 16:9 screen ratio, and the knowledge that gaming has changed for the better since those early days. You can make this comparison even more clearly because the original game is included along with the package.

I have to be honest and say I sincerely dislike this game. I never played the original, so I have no memory of its potential greatness. Sadly, I loathe even thinking about Nights into Dreams and relish the thought of never having to touch it again. The colors, the music, the game mechanics, and the bad camera control all conspire to make a newer-school player like myself positively angry at having to attempt the precise completion needed to reach the final levels. 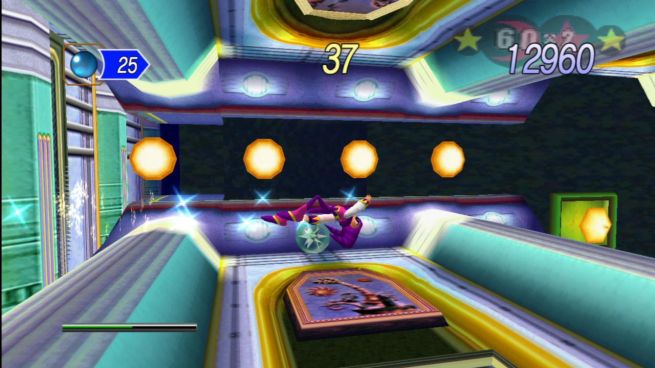 It’s an enhanced restoration of the original game
Nostalgia is the key here, along with a tolerance for older gaming mechanics. Replaying each level is essential, as the timed nature and grading system rewards memorization and expert-like fine motor control. Precise maneuvering will allow you to collect all the glowing blue energy balls to destroy the floating bubble platforms, avoid the floating sky-crab things, and grab point-earning stars. Along the way, you can enjoy the Saturn-era music, which ranges from jazzy to atmospheric, albeit of a decidedly 1994 vintage. Sega provides a way to play the soundtrack and sound effects through a menu as well, giving interested parties a chance to really dig into the experience of a game that is, aside from the visual upgrade, a loving restoration of a well-remembered title.

The classic-era play style
If you like bettering your scores and replaying the same tracks, like in a racing game, you’ll enjoy this game. I still liked finding hidden areas along the paths. The “Soft Museum,” for example, has a bouncy-house feel to it and is visually delightful. Nights is beautiful when soaring through the air, though controlling it around obstacles is frustrating. The colors are all bright and glowing as if the developers drew them with a neon-hot piece of sidewalk chalk. The look, especially during the boss fights, which each take place within a constrained circular area, remind me of the visual style from the older rides in Disneyland theme park’s Fantasyland area like Alice in Wonderland and Mr. Toad’s Wild Ride.

Flying is fun
Soaring through the air, either as Nights (or child protagonists Claris and Elliot during the final level) is actually very enjoyable. The animation is fluid, and it really captures the essence of flight. I can better see why this game is so beloved when I consider that this title released during a time where this flight sense was like nothing else. Like Sega’s famous blue hedgehog’s connection to speed, Nights’ titular character is all about flight. I would love a level where the only objective is to fly and explore, unfettered by a timing constraint or specific objectives.