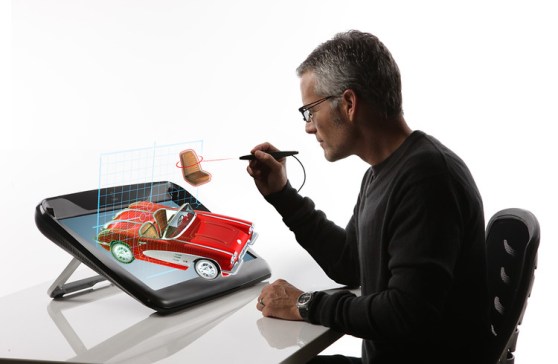 Virtual-holographic 3D company Infinite Z is teaming up with video game engine-maker Unity to make it easier for developers to create holographic games.

Infinite Z’s zSpace platform creates holographic images that you can interact with as if they were real objects. It’s tough to envision, but think of it as a natural precursor to the sort of technology seen in Iron Man — except with a stylus and a pair of 3D glasses. (The video below should give you a better idea of how it works.)

By working alongside Unity, sSpace aims to become the ideal destination for developers looking to make 3D versions of so-called “serious games” — such as those that combine gaming with learning.

When we spoke last week,  zSpace marketing vice president Mike Harper said that zSpace’s technology will one day be ideal for a wide range of disciplines, including medicine, education, and engineering.

“This technology is only going to get better,” he said.

Of course, as with most things involving 3D, it’s hard to get a sense for just how cool zSpace is without seeing it person. “That’s one of our main challenges,” Harper told me.

3D hasn’t been especially successful in video games. Sony made a significant push for 3D gaming with the PlayStation 3, but few games make use of it. Sony even rolled out a PlayStation 3D display in 2010, but it’s no longer in stock on its online store.

The other challenge? Getting developers interested in what Infinite Z is working on. That’s why working with Unity is so important. After all, every new technology has to develop a developer community around it before it can really take off.