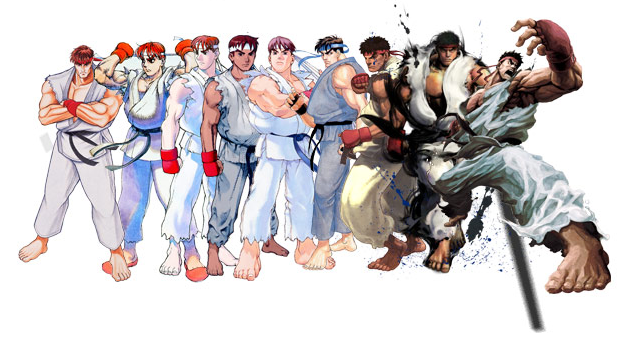 Twenty-five years of Street Fighter. That’s a lot of punches, kicks, fireballs, and smashed-up cars. But that’s also a lot of time for the venerable fighting-game series to accumulate anecdotes, fans, and all-around weirdness.

Last month, publisher/developer Capcom released the Street Fighter 25th Anniversary Collection Set for the PlayStation 3 and Xbox 360 — a gigantic package that would put E. Honda’s formidable girth to shame. Within the myriad of discs inside is one excellent, must-see documentary that covers the Street Fighter phenomenon from its arcade roots to its current high-level tournament play.

More interestingly, the movie takes a close look at some of the lesser-known and stranger aspects of a franchise that has extended its roots deep, deep into gaming culture: hardcore collectors, professional players , the still-thriving arcade battles in Japan, and … romance (yes, romance). Oh, and it has interviews with the two guys responsible for this epic showdown, perhaps the greatest single moment in Street Fighter history.

The creators of this documentary, Area 5, recently stopped by the GamesBeat office to give us a behind-the-scenes tour of their two months of filming, filled with fascinating stories (many of which never made it into the final cut). You can hear some of these tales in our BYOT (Bring Your Own Topic) podcast, but here are a bunch of bits that didn’t make it into our show. (All photos are from the movie.)

On the most obscure thing they’ve seen a Street Fighter fan collect:

Cesar Quintero, producer: “Clarence, the superfan featured in the movie, has a Street Fighter ‘Look and Find,’ which is basically a Where’s Waldo book with Street Fighter characters. There’ll be this scene, a bustling metropolitan street, and Blanka is hidden in a ramen stall in the corner. It’s really strange.”

Quintero: “No, because I would have bought those.”

Quintero: “Clarence has an unopened board game. Street Fighter: The Movie board game. He has a collection of cards in those plastic transparent sleeves, but they’re drawn super-shittily. They look like they’re drawn by the guy who drew the original Mega Man box.”

On the strangest piece of Street Fighter memorabilia they’ve seen outside of Clarence’s home:

Quintero: “I was setting up to film an interview in Japan, and one point Capcom brings in this really great marquee, and I’m like, ‘Oh, this is awesome. I’ll try to feature this the most. I’ll put it up over here.’ They say, ‘Actually, can you block out the lettering out at the bottom? There’s a bunch of Japanese type at the bottom of this sign.’ And I said, ‘OK, I can probably do that but why?’ And they say, ‘Well, this is actually an ad for Street Fighter wontons. It says, at the bottom, “Street Fighter wontons, get ’em now!” So we don’t want to feature this. They’re long gone.’”

“I remember thinking, ‘Man, what would it be like to go into the store and pick up Street Fighter wontons?'”

Quintero: “Because they were Street Fighter wontons! They were licensed wontons.”

Quintero: “I assume they maybe had fireball-shaped ones? Or a fist or a sonic boom shape? Well, wontons are inherently sonic boom-shaped. …”

On the coolest thing they’ve seen a fan collect:

Quintero: “Clarence had frames up on his wall of the Street Fighter Udon comics. The blue-line versions, the original art versions of the comics. Those were pretty cool.

Ryan O’Donnell, producer: “For me, [famous tournament player] Justin Wong was interesting because he has a bunch of the Mad Catz fighting stick controllers that we all use now. Those are expensive. They cost like $150 or whatever. You buy one, you’re done. You can’t justify buying any more of those. But someone like Justin Wong, he’s got a crapload of them.”

Quintero: “Yeah, he had just a pile of them in the living room.”

O’Donnell: “Sometimes he gets them for free. Sometimes he buys them. But he has all the ones with all the different artwork — tons of different variations. It was cool to see that many joysticks all in one spot.” 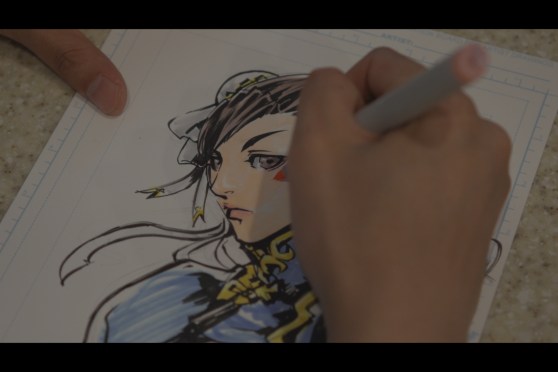