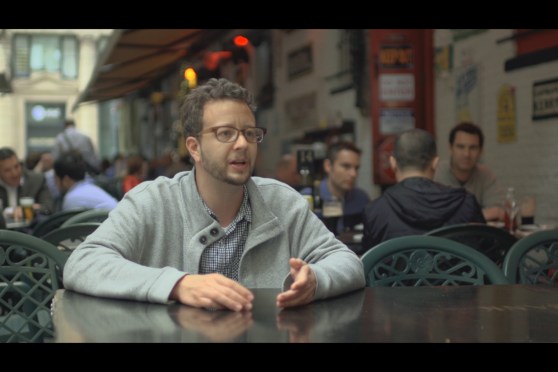 On any players who were almost scary in their knowledge of Street Fighter:

Quintero: “I would say Seth Killian [pictured above], who was the former Street Fighter advisor to Capcom. He had the scariest knowledge about the fighting system. The funny thing is, not a lot of people know but he’s also a poker whiz. His second game, besides fighting games, is poker.

“It makes sense when you think about it, because he talks about Street Fighter like he talks about chess. But it’s not only chess. It’s chess plus cards, because it’s not only about playing the best you can at the skill that you’re playing. It’s also about reading your opponents and exploiting every weakness that you can. It’s almost like listening to a poker shark talk about his game. The way he reads people and the way he talks about people.

“Seth is legitimately the scariest person ever. I’m sure if I saw a conversation between him and, say, Justin Wong, it would probably go into a language I didn’t even understand.”

O’Donnell: “The way that Seth met Tom Cannon, one of the founders of the EVO tournament and Shoryuken.com — they all met on message boards. Before the Internet was the Internet that we know, it was newsgroups and that sort of thing. There were these fighting-game newsgroups where all the craziest fighting-game people of the time would meet up and talk strategies. It was the only way they had to communicate with one another over long distances. Other than that, all you had was your local arcade as a place to share ideas.

“So Seth told us how he would try to describe, in text, trapping a certain character in a fireball trap in the corner of the screen. He would say that this would work, and then Tom would be like, ‘No, man, that totally wouldn’t work. I would do such and such to get out of there.’

“And of course they both thought they were right, so it’d turn into a flame war. They’d argue about it and use colorful language. All you could do was argue in words. So these fights would go on for weeks or months, just about ‘Can you do this certain strategy?’ It was that sort of mentality that led them to eventually try to get together and play, to travel to find other players to play, because they realized ‘We’re never gonna find out who’s the best. We’re never gonna figure out which strategies work and which don’t if the only thing we can rely on is a bunch of text on the Internet or going to our local arcade and playing against the same people we always play.’

“When Seth talks about getting the job at Capcom, he told us, ‘I’ve analyzed this game for tens of thousands of hours over the years. I didn’t go to college and get a degree in playing Street Fighter. It’s not written on a piece of paper. It’s just all this time spent playing this game. I can back it up because I can show it to you in the game.'”

Quintero: “And he’s an academic, which helps. That’s what made him the most interesting person. He has such an ability to talk about the intricacies of Street Fighter that it really wows you. He could be talking about nuclear physics for all we know. It’s Street Fighter, though. It’s incredibly engrossing to hear the nitty-gritty of what he considers good, bad, mediocre, or interesting play. It’s like listening to a professor talk about Street Fighter.”

On “the perfect Street Fighter session”:

O’Donnell: “Seth told us a story about playing perfect Street Fighter one time. He was at an arcade in Tokyo playing against [tournament star Umehara] Daigo. The way he described it, it wasn’t a big competition. They were just playing some exhibition matches. They were playing nine games in a row, and I think Daigo was playing Ryu, and Seth was playing Chun-Li.

“He says it was perfect Street Fighter. He didn’t make any unforced errors. Daigo didn’t make any unforced errors. It was just a Zen moment flowing through them, both playing perfectly. At the end, Daigo won with about two-thirds of the wins, which is exactly how the player ratios should happen. The historians think that Ryu is two-thirds better than Chun-Li is, so that’s exactly how that game should have played out based on how good the characters are and probability.”

On the most amazing arcade still around:

Quintero: “Oh, dude, the Street Fighter arcade outside of Tokyo. It’s a proper Capcom-owned arcade that’s all Street Fighter-themed. The first room is E. Honda’s bath house. Second room is the stage where you break barrels with Guile and Ken. Then you go up, and it’s nothing but Capcom stuff, and it’s glorious. It’s everything in Capcom history.

“If I was to describe it in size, it’s probably about 3,000 square feet? It’s huge. But the most awesome thing about it is that there’s Street Fighter art everywhere. E. Honda’s tipping over into the bath in pictures in the corners. Chun-Li’s doing her lightning kicks across the wall. It’s the coolest for any Street Fighter fan ever. I’d say this is the Mecca that you need to go to. It’s mind-blowing.”