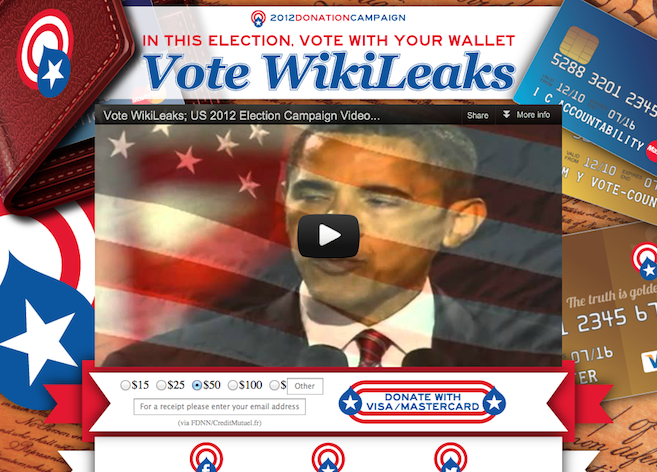 Anonymous and Wikileaks have seemingly broken a longstanding partnership after Wikileaks put up a paywall over a number of leaked documents on its website.

Wikileaks is a driving force behind “transparency” in the world, often obtaining private or confidential emails, documents, and other communications, to show how politicians and other world leaders actually operate. One of the most famous leaks, known as “Cablegate,” was when Wikileaks got its hands on some U.S. diplomatic cables in 2010. The cables revealed information about the U.S. and the war in Afghanistan as well as other current events.

Today, those who tried to access Wikileaks’ documents were interrupted by a splash page that could not be closed. The page had a video about President Obama and called for the visitor to either donate to Wikileaks or share the video on Facebook or Twitter. Doing one of those three actions would remove the splash page, giving access to the documents.

As Wired notes, the “paywall” wasn’t up on all of the leaked documents that Wikileaks hosts, but just the fact that it exists caused Anonymous to sever its ties with the organization.

“We have been worried about the direction Wikileaks is going for a while. In the recent month the focus moved away from actual leaks and the fight for freedom of information further and further while it concentrated more and more on Julian Assange,” said Anonymous in a statement. “It goes without saying that we oppose any plans of extraditing Julian to the USA. He is a content provider and publisher, not a criminal. But Wikileaks is not — or should not be — about Julian Assange alone.”

Anonymous went on to explain that it realizes the paywall can be circumvented by disabling Javascript but is angry because the “casual user” won’t realize that.

You can read Anonymous’ full statement on Pastebin.

After Cablegate went public, Anonymous defended Wikileaks by attacking a number of payments companies after they cut off donations to the leaks website. PayPal and Visa were among those attacked.

Wikileaks’ founder Julian Assange was recently granted asylum by Ecuador and resides in the country’s embassy in London. Assange was arrested in the U.K. for sex crimes he allegedly committed in Sweden. He was to be extradited to Sweden but called for asylum when the country couldn’t promise he wouldn’t be further extradited to the United States for Cablegate.

“The conclusion for us is that we cannot support anymore what Wikileaks has become — the One Man Julian Assange show,” Anonymous continued. “But we also want to make clear that we still support the original idea behind Wikileaks: Freedom of information and transparent governments. Sadly we realize that Wikileaks does not stand for this idea anymore.”