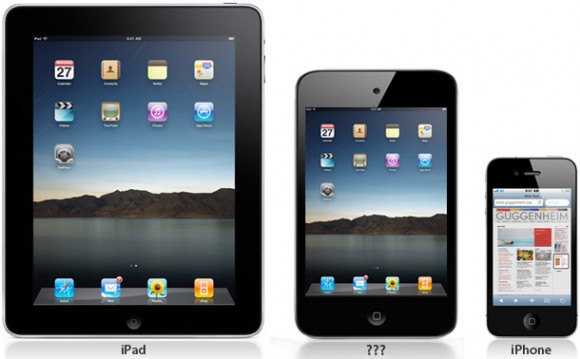 iPad Mini models and prices have been revealed by someone with access to the internal system of Europe’s largest electronics retailer, Media Markt.

According to the screenshot, there will be 16 different iPad Mini configurations, starting at an 8GB WiFI model for approximately $250 U.S., rising to a 64GB version with cellular — presumably including 4G LTE connectivity as well as 3G.

The prices are an interesting comparison to an iPod Touch, which starts at $299 for 32GB, an iPad2, which starts at $399 for 16GB, and the newest retina iPad, which begins at $499 … all of which will force consumers to think hard about the exact mix of portability and product they want when purchasing. And they provide Apple a tablet price point at least within shouting range of Amazon’s we-sell-at-cost Kindle Fire, at $159.

But, in a very Apple-esque move, they are not aggressively challenging the $200 mark.

Here are the models, which anyone who’s looked at the current iPad versions will recognize. For each I’ve roughly translated the price from Euros to U.S. dollars, minus Germany’s 19 percent value-added tax.

This is the screenshot, from a German blog. If you want to read the original, but don’t speak German, Google Translate is somewhat helpful.

Above: iPad Mini models and prices

October 23rd seems to be the day for the big announcement, two days before Apple’s quarterly earnings will be released. Assuming these numbers are correct, we’ll see then what kind of value Apple is packing into the iPad Mini in return for $250 to $650 dollars.