Microsoft’s Zune music service and players utterly failed to steal market share from Apple’s iTunes and iOS devices. But the Redmond, Wash.-based software giant is trying again today with the unveiling of the Xbox Music service for Windows 8.

With this new service, Microsoft has learned the lessons of Pandora and Spotify, which have gotten traction with their free music offerings. Microsoft will have a free version of streamed songs with Xbox Music, but it will also offer an offline-based premium subscription service for $9.95 a month. And you can purchase songs or albums a la carte.

Xbox Music will have a global catalog of 30 million songs and launch in 22 markets worldwide. And it will work across tablets, PCs, smartphones and televisions (via the Xbox 360 console). The service will work on the Xbox 360, Windows 8 PCs and tablets, Windows RT tablets like Microsoft Surface, and Windows Phone 8 (when it becomes available). More devices will be added over time. 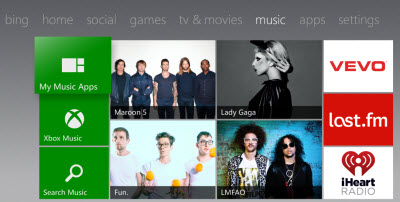 The thinking is to offer “all the music you love, every way you want it,” according to Jerry Johnson, general manager of Xbox Music, in an interview with VentureBeat/GamesBeat.

“Xbox is starting to transform entertainment, and that transformation is being embraced by Microsoft,” he said. “Xbox is about more than gaming.”

Right now, Johnson says music lovers have to use several different resources to get music exactly how they want it. You use something like Pandora to discover music, but have to listen to ads, and you can’t change the programming. You can use Spotify to stream songs. And you have to use a paid-subscription service to download your collection and create your own playlists. With Xbox Music, you can do all of that.

“Today’s music is too much work,” Johnson said. “Music should not be work.” 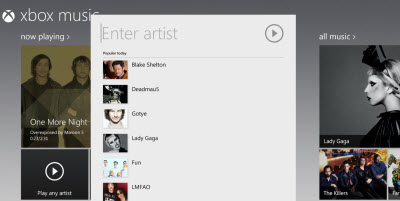 In the past, Microsoft’s music offerings focused on the Zune music players, Johnson said.

The scale of change for Microsoft is impressive. But Johnson added, “If you are an entertainment company, you have to be in music. And you can’t just put a check on the box. You have to solve real consumer problems. We are putting functions in the cloud and building the service from the ground up.”

With Xbox Music, you have the freedom to stream custom-created playlists for free. You can subscribe to all the music you want or download your favorite songs.

The cloud-based system lets you experience music on any player. And the capability to use Xbox Music on each device will be better than in the past. The Zune service on the Xbox 360 was not particularly robust, as it did not allow you to create and store your own playlists on the console.

One of the biggest changes is the addition of a streaming option that matches what Spotify does. Microsoft will create its service on a global level.

“Spotify is one of the most disruptive music services that has come along,” Johnson said.

While it is big in Europe, Spotify has only begun to penetrate the U.S. market. Some artists like the Black Keys do not allow their music to be streamed. In that case, Xbox Music gives you options for listening to their work, either via a la carte purchase or subscription.

“The launch of Xbox Music is a milestone in simplifying digital music on every type of device and on a global scale,” said Don Mattrick, president of the Interactive Entertainment Business at Microsoft. “We’re breaking down the walls that fracture your music experiences today to ensure that music is better and integrated across the screens that you care about most — your tablet, PC, phone, and TV.”

Johnson said that Microsoft wants to address all aspects of music distribution, offering features such as the ability to discover new artists across all the players you own. You can stream tens of millions of songs for free. You can type (or speak in the case of Kinect on the Xbox 360) a musician or song name into a search field and then hit play to start playing the track. The song plays instantly, and you can create an unlimited number of your own custom playlists. The offering includes ads.

With the subscription-based Xbox Music Pass, you pay $9.99 a month for both streaming and offline access. You can listen to music without ads and play songs on any device. It also unlocks more than 70,000 music videos on the Xbox 360.