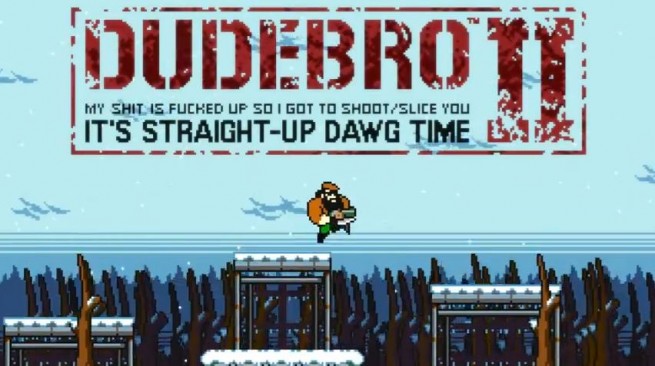 It started as a comment on a message board. It quickly became a meme, and then the board’s community decided it had to become real.

Dudebro — My Shit Is Fucked Up So I Got To Shoot/Slice You II: It’s Straight-Up Dawg Time is the first original game from the community of gaming fans at the NeoGAF forums, one of the most popular video-game message boards on the Internet. A small team chipped away at the game’s development for the past few years, and they are finally ready to show the first gameplay trailer of the side-scrolling action shooter.

For those who don’t know about Dudebro II — you can read an extensive history here — it began in a thread about Imagine: Babyz Fashion from NeoGAF user Cuyahoga. That casual Ubisoft game is a prime target for the cynical NeoGAF audience, and anyone who plays it is in for a bit of rudeness from other posters. That’s exactly what happened, but Cuyahoga didn’t take the abuse lying down; he responded with the following post:

So, I’m a pedophile because I don’t want to play Dudebro, My Shit is Fucked Up So I Got to Shoot/Slice You II: It’s Straight-Up Dawg Time? To throw around these sort of accusations at someone who seeks to do something different suggests quite the insecurity on your part.

An hour later, that hypothetical Dudebro game (which mocks popular shooters like Call of Duty: Modern Warfare 2) had become a full-fledged meme. Only instead of dying out or getting old, like other inside jokes on message boards, Dudebro II became real. A dedicated group of forum users gathered to form the Dudebro II development team called Grimoire Assembly Forge.