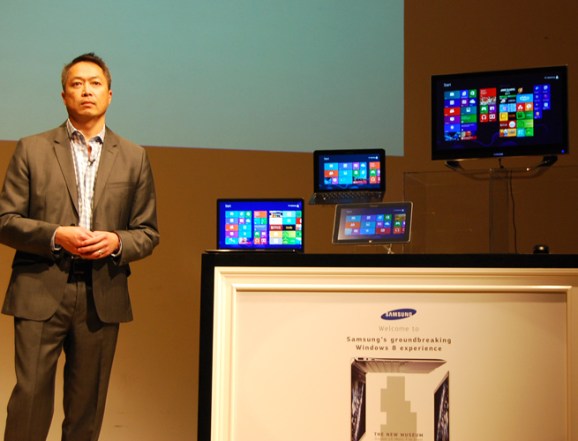 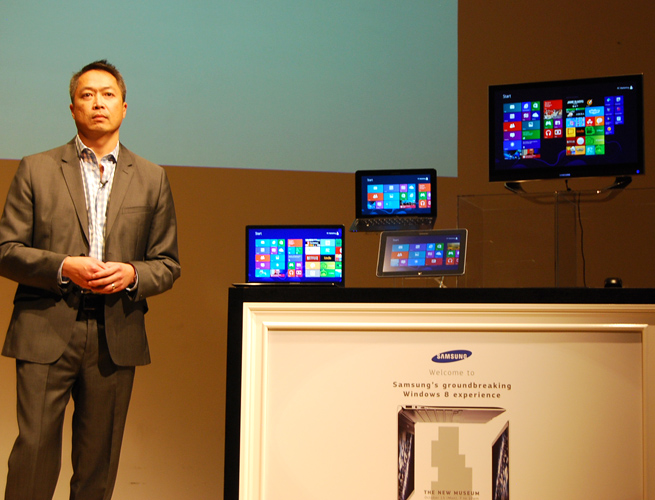 NEW YORK CITY — Korean electronics giant Samsung has been steadily revealing details about its lineup of Windows 8 PCs and tablet hybrids, but tonight we finally have what appears to be the finalized lineup and prices of these new devices.

“Tablets and smartphones are ushering in a new era of computing mobility,” Samsung America consumer electronics head Tim Baxter said to a crowd of reporters. “New categories will arise as a result of this.”

Samsung’s “new category?” The “Smart PC”, or what you might know as a laptop/tablet hybrid. “The Smart PC is a new category driven by innovation and U.I., with Windows 8 as the lynch pin,” Baxter said.

Samsung senior VP Mike Abary (pictured) then came out to show some of the newest devices, many of which we’d seen beforehand. But now we’ve got pricing.

The most interesting units among the new lineup are the Smart PCs. The cheapest option among these devices is the ATIV Smart PC 500T without the detachable keyboard. That runs for $650. Samsung did not reveal any tablets running Windows RT, but we expect that might come later this year and cost less than the ATIV Smart PC 500T. (Perhaps $400 or $500 to be more competitive with the iPad.)

Here’s the full lineup, most of which will be available on Oct. 26 in stores and online. (We’ll fill this in with more details/specs once we get more info from Samsung.)

Check out the gallery below for photos from the event.